There's another release of the Star Wars movies imminent, this time on Blu-ray. There have been more changes made to the films and also included is a selection of deleted scenes. Posted online is an alternative take of Harrison Ford and Carrie Fisher on Hoth. Watch it here. I checked it out and realised that I was familiar with the deleted dialogue. A lot of it was in the comic adaptation from 1980. 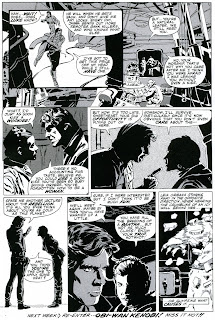 These comics took a long time to do, and so the writer Archie Goodwin and artist Al Williamson would work from scripts and reference photos, so as to have the comic ready at the same time as the movie was released. By this time, dialogue had changed and scenes had been cut, but they were still in the comics. I remember there was much more to Luke's training with Yoda in the comic, for instance.

This black and white artwork really shows up Williamson's work nicely. The writing at the bottom, "Next week! Re-Enter: Obi-Wan Kenobi! Miss it not!" is there because this page is from the UK weekly reprint comic. As six pages had gone by, it was time for a break until the next issue. I can still remember the anticipation for the next instalment. The arm bursting through the wall at the end is a wampa monster, in a scene that was cut from the movie but is also in the deleted scenes now offered.
Posted by David Robertson at 2:14 PM No comments:

The Sixpenny Murder is a new British comic written by John A. Short and drawn by David Hitchcock. Originally part of a project named Changing Places+ devised by a psychologist, it's now available from John's own comics company, Kult Kreations and in comic stores nationwide. 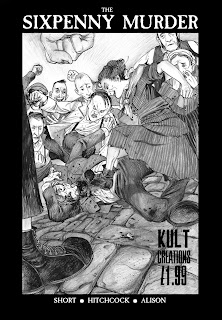 I recently interviewed John and it’s now been published over at the Down the Tubes UK comics website. Have a read here.

Posted by David Robertson at 12:40 PM No comments: