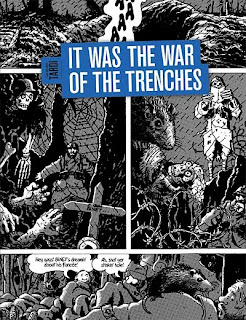 I never read much in the way of war comics while growing up. Probably one of the few comics genres I did miss out on.
I've had occassion to look into comics based on World War I lately though. I decided to check out the new collection of Jacques Tardi's It Was the War of the Trenches. I've read the bits of Tardi that were in Raw years ago and so was pretty sure this would be good.
Well, it is a very powerful piece of work indeed. Many many haunting scenes. Beautifully drawn images. It's exemplary.

As a taster here is a video of Tardi working on just one of the panels in the book...
Posted by David Robertson at 3:34 PM

Email ThisBlogThis!Share to TwitterShare to FacebookShare to Pinterest
Labels: It Was the War of the Trenches, Jacques Tardi, Raw