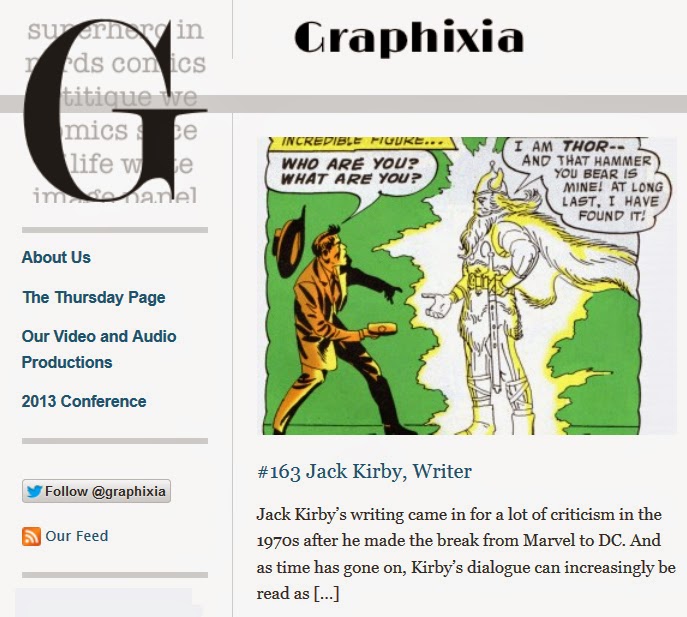 I've written an article on Jack Kirby's contribution to comics as a writer.
It's been published over at Graphixia.
Please go here to have a look.


"Jack Kirby’s writing came in for a lot of criticism in the 1970s after he made the break from Marvel Comics to DC Comics. And as time has gone on, Kirby’s dialogue can increasingly be read as stilted, in an age where “believable” or failing that, witty interchange between characters is much prized. He is out of step with how culture has gone because he is so earnest in his writing.
Due to their great success in the 1960s at Marvel Comics, which were credited to Stan Lee as writer and Kirby as artist, it is tempting to look at those comics,  compare them to Kirby’s later work and subtract the difference as being Lee’s contribution. There is much debate about who exactly was responsible for what though, as Gerard Jones states:
“Stan turned to Jack Kirby and through a process now eternally obscured by competing stories – both men claimed to have had all the basic ideas first – introduced Fantastic Four” (a)
Traditional notions of what a writer and an illustrator do Kirby are surely too simplistic when applied to comics, as recounted by Ronin Ro:
“When Stan saw the Surfer in his pages, he asked “Who the hell’s this?” “ I figured anybody as powerful as Galactus ought to have a herald who would go ahead of him and find planets,” Jack replied. “That’s a great idea!” (b)
Leaving aside the thorny issue of what exactly is meant by writer in these credits, amongst what one might assume to be the Lee contribution is snappy banter between characters, witty and self-knowing asides and a more general showman/ringmaster persona that he brought to the editorial side of his work.
This leaves Kirby with imaginative design in characters and environments, dramatic pacing, and a smaller or greater element of the plot depending on how detailed initial instruction from Lee was.
By the time Kirby is doing the writing and drawing at DC, the imaginative characters, locations and plots are intact (arguably even more so), and the action and story progression is still very dynamic. What has been lost is a street level, smart-talking point of entry. Lee’s writing was done in reaction to Kirby’s artwork. In a sense he was commenting on what Kirby had created in the artwork.
Kirby was always interested in creating new characters, situations and environments. In the late 60s, he proposed his New Gods ideas to Marvel, who didn’t want to use them. He took them to rivals DC instead.
Kirby often used Gods, or variations on powerful celestial beings, in his stories. His contention that he, and not Lee, came up with the idea to do comics based on Norse mythology gains credence from the fact that Kirby had already done a version of Thor at DC in 1957 before doing it for Marvel in 1962.

Kirby, Thor, DC Comics, 1957
Kirby was interested in technology, machinery, and philosophy. But anyone who thinks Kirby could not deliver on an emotional level would be mistaken. Just look at this one panel from Mister Miracle …

Kirby, Mister Miracle, DC Comics, 1974
It’s melodramatic, but even without any context, you have the sense of what Oberon (on the left) is feeling in this picture.
When Kirby returned to Marvel in the mid 70s, his contract afforded him the opportunity to officially write, draw and edit his own books, a condition that Lee was willing to capitulate to in order to get Kirby back. He set to work on Eternals…

Kirby, Eternals, Marvel Comics, 1976
Kirby was keen to create more new stories, characters and situations, in opposition to what had become the Marvel norm, whereby all the comics fed into each other to varying extents (all characters in Marvel Comics  had to meet Spider-Man at some point, be they Howard the Duck, Transformers or the Frankenstein monster).  Kirby did not want to create stories which had to negotiate through the convoluted continuity of twenty or so years of previously published comics. As Sean Howe writes,
“In Captain America, assistant editor Roger Stern had to rewrite a Kirby reference to a flying saucer being “the first alien space craft ever to visit the Earth, “ a description that would discount scores of Marvel adventures and not a few of the characters.” (c)
I only later read any of the background on Kirby’s self-penned comics. Summing up the industry view of him at this point, Mark Evanier writes:
“Just then, he’d stopped beoing Jack Kirby, the guy who created, or co-created, so many successful new comics. With the end of his contract in sight, he was Jack Kirby, the guy who did those wonky, unreadable books that didn’t sell so great.”(d)
Evanier also writes:
“Years after, his seventies work would be regarded more favourably, and even reprinted, right along with everything else he did, time and again. Some would even say the sales figures weren’t as dour as the rumours of the times insisted”. (d)
Anecdotally, I bought and read them. Perhaps there is a generational element to one’s appreciation of Kirby’s writing. The late 1970s Captain America were actually the first comics I read by Kirby, and I thought they were terrific as a kid. Instead of the wry, slightly arch dialogue of Lee though, in Kirby’s self-scripted comics we instead have an earnest, almost poetic series of statements. These are sentences that no-one has ever said or ever will say. They are not capturing a realistic conversational tone, they are lines which aspire to be about the magical, the fantastic, the wonderful. In this respect they are more in tune with the artwork. The totality of the comic is now Jack Kirby.

Kirby, Silver Star, Pacific Comics, 1983
Postscript
Incidentally, although Kirby’s dialogue and writing is unique, another writer whose work reminds me of him is Ann Nocenti. In Longshot she is also operating in a similarly fantastical environment filled with outlandish characters. See this following discourse…