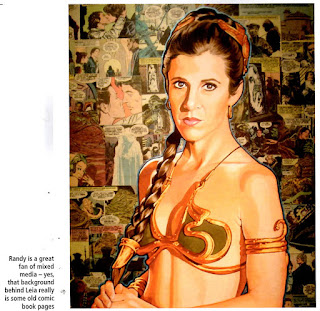 Flicking through, I came to the image above. This is the caption:

"Randy is a great fan of mixed media - yes, that background behind Leia really is some old comic book pages"

I have never seen Al Williamson's art from the Empire Strikes Back and Return of the Jedi comic adaptations referred to in such an offhand way before. This statement lazily - and I would imagine unintentionally - belittles Williamson, and comics themselves. It seems they are not artworks by a particular artist, but are just some old things an artist finds lying around and can stick in the background of their artwork.

Such ignorance from any source - but especially from a magazine purporting to be about Star Wars artists. They show no signs of knowing who Williamson is. He is arguably the top Star Wars comic artist ever, and also influenced Lucas before he'd put the film together.

I must add that I have no idea what Randy Martinez's take is on Williamson - he is not asked about him. Nor is Williamson mentioned anywhere in the article.

It's just a little thing, a caption, but it really pissed me off. It actually made me sorry that I'd handed over money to justify such ignorance.

Posted by David Robertson at 10:29 AM