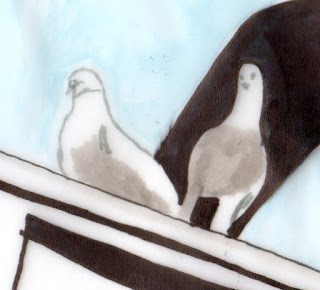 In the week after David Bowie died, Chris Evans on his BBC Radio 2 show decided to play two Bowie tracks each day. Consecutive shows would feature songs from each decade from the 60s onwards. When it came to Thursday, he played two more from the 60s instead of the 90s, because (paraphrasing) 'it's better'. This bugged me as I can immediately recall great songs he did in the 90s. Jump They Say; Strangers When We Meet and Little Wonder all come to mind with no effort.


When I decided to do a drawing to honour Bowie, this thought was still in the back of my head and as I searched my mind for an image I wanted to draw, I remembered him teetering on top of a building in the Jump They Say video from 1993. A quick reviewing on YouTube crystallised the image that had stuck with me.

My piece is now up here at the Spindle website. I hope you like it.
Posted by David Robertson at 2:05 PM