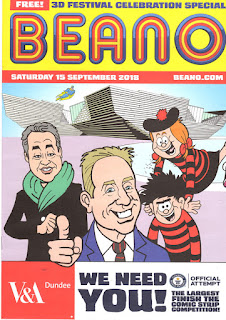 This is an exciting time in Dundee, as the V&A has its opening weekend.

Yesterday, a special edition of The Beano was unveiled, as part of the 3D festival in Slessor Gardens. The last panel of the comic is blank, inviting visitors to the "pop-up" Beano tent to complete it. This was also a Guinness World Records attempt - the largest finish the comic strip competition! It was open to all ages; as Mike Stirling of The Beano said on the day, the youngest was 2 years old, and the oldest was 80. One of these final panels will be chosen to be exhibited in the V&A building.


I was pleased to be in the tent alongside my Dundee Comics Creative Space colleagues Rebecca Horner and Catriona Laird. We gave encouragement and advice to the people taking part. It was a lot of fun and great to be involved in this new era for Dundee. The building is open to the general public starting Monday.

PS. It was also nice to catch up with my old chum Gary Robinson. I didn't know he was going to be there until he bounded out onstage acting as MC for the bands on stage. An excellent day all round!
Posted by David Robertson at 6:17 AM