I'm a guest on the latest episode of Comic Scene the Podcast.

In it I talk about The Incredible Hulk Annual 1980, and Soldier's Heart by Carol Tyler. The show was recorded just after I'd had the idea to put together my 1990s comic But a Dream!, so it's nice to have my initial burst of enthusiasm recorded.

"In this episode I chat to David Robertson who runs Fred Egg Comics, and is a member of the 'That Comic Smell' podcast team. I also chat to Ian Wheeler, current Comic Scene writer, and the creator of the fondly regarded Eagle Flies Again fanzine. Ian has recently been published in Doctor Who Magazine, issue 536. Special guest starring Ian's cat!"

It's online now. Have a listen here. 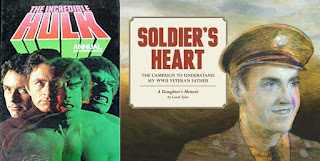 Posted by David Robertson at 2:41 AM