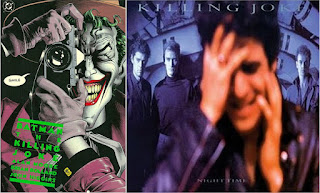 When Batman: The Killing Joke came out in 1988, it was unusual for a prestige format DC comic in that it had distribution right away in venues other than comic stores.

I remember seeing it on sale in Virgin Records (alongside newly released Duran Duran live video "Working for the Skin Trade").

My first thought was "Oh, that Batman comic has the name of the band".

This has always been part of the comic for me, and I presume for most people who know of the band.

I listen to them every so often, and this time around I got to thinking that many years and decades have gone by now, and maybe some comic readers don't know of the band?

They're bloody good, and have recorded some great songs!

Posted by David Robertson at 6:05 AM