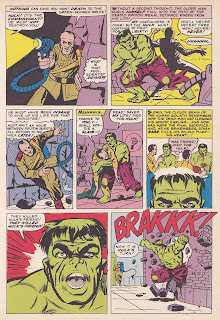 Another artist who worked on the Hulk, almost from the beginning, was Steve Ditko. This great artist is probably best know for co-creating Spider-Man and Doctor Strange, but he has done loads of fascinating work over the decades.

In the original six issue Hulk series, he inked over Kirby's pencils, and drew the 6th issue. After this, the Hulk appeared in Tales to Astonish regularly, drawn by Ditko.

The page above is from 1965, and in it we see an emotional scene where Hulk is upset because his new friend has been cruelly cut down by a deadly proton beam, held in the hand of "the fanatical commandant of the red weapons testing centre". Very moving when you're 8 years old. And then it's time for a rampage. Yes!

I didn't read these comics in the 60s - that was before my time. Luckily enough, when I was growing up Marvel UK were reprinting the 60s stuff as pocketbooks. Alongside this they were also reprinting current stories, one of which was a Ditko story - an excerpt of which is shown below. I didn't really know there was a 15 year gap inbetween the stories. I just knew it was all Ditko and all good. 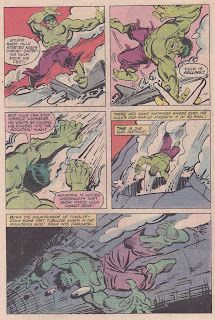