Another in a series of mini-interviews with the guest artists who are featured in Dump #2. Next up is Damon Herd…

DH: Yes, I've always been interested in comics. i remember buying the NUTTY when I was a kid and had a drawing published in issue 26. 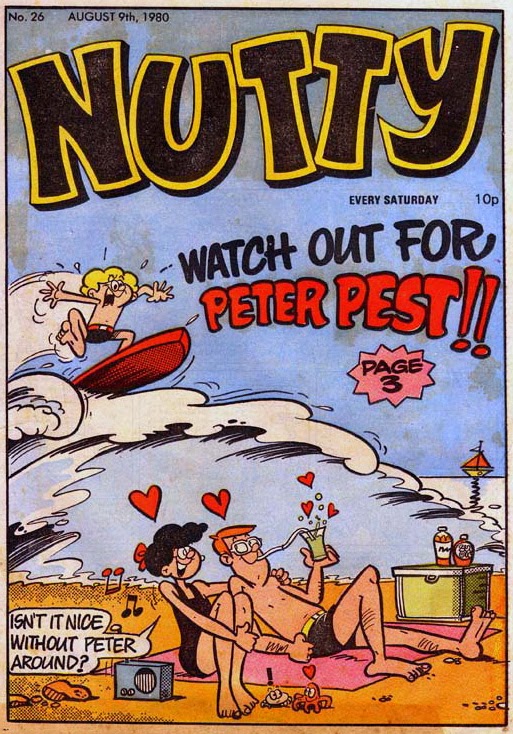 I had a few Marvel UK Hulk comics as I loved the TV show (also Wonder Woman but never got any comics). I never really read much superhero stuff after that, I do remember spending days in the local library reading Asterix and Tintin books. My Dad had fabric pens for drawing on T-shirts and I made my own Asterix T-shirt!
I recently remembered reading TOPS magazine, which was a rival to Look-in and had TV and pop music strips. I was a big fan of Adam Ant and they ran a bio strip about him as well as fantasy adventures, that was probably my first experience of autobio type comics.
As a teenager I read 2000AD and then Deadline and started getting into American indie comics when I discovered Peter Bagge's Neat Stuff and Daniel Clowes Lloyd Llewellyn. Then Love & Rockets and Dennis Eichorn's Real Stuff. Autobio became my big thing especially Eddie Camppbell's Alec, David B's Epileptic, and Julie Doucet's Dirty Plotte. Most recently I've been impressed by the work of Geneviève Castrée and Ulli Lust.

I did a short strip for Graphixia last year about my life in comics (
http://www.graphixia.cssgn.org/2013/01/22/100-standing-in-relation-to-comics-a-special-100th-post/ )
DR: What had been your experience in making comics yourself before your contribution to Dump?
DH: I drew the occasional comic as a kid. I remember making a Danger Mouse one as a kid with a pal and I used to copy the characters in Asterix. If I drew a superhero he would have the physique of a muscly legionnaire.
The Weetabix skinheads were an influence too. I didn't draw much in my teens which I regret but slowly picked it up again in my 20s with a very occasional one pager.
I didn't really get going again until my 30s when I went to art school. I studied Book Arts and they were very happy for me to make comics as my projects. I started to do my own minis, such as You're So Vain which looked at scalp replacement surgery. On my illustration MA I produced my autobio comic The Adventures of Ticking Boy. 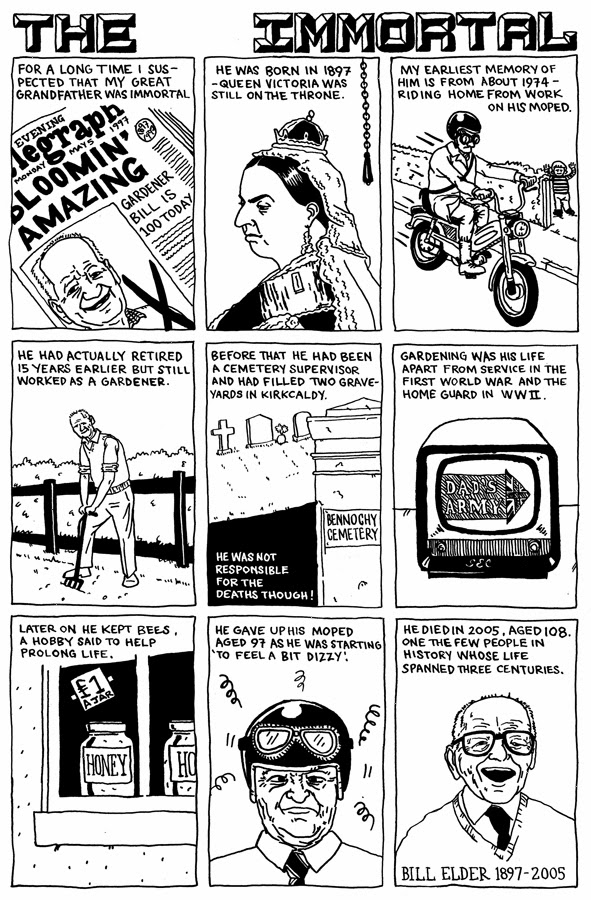 Twitter and tumblr are both good ways to discover and connect with other cartoonists, and for the last 2 years I have taken part in 30 Days of Comics. Each day in November you have to create a short strip. I've produced a minicomic of my results each year.
The creating of strips has been sidelined slightly by my current PhD studies but I have produced some autobio strips as part of my research.
DR: What other artistic pursuits do you follow? I've seen you implement guitar playing into your comics talks.
DH: Ha, yeah, I did play an electric guitar soundtrack to a strip at a DeeCAP performance evening. DeeCAP stands for Dundee Comics/Art/Performance and we host comics readings which can be as straightforward or highly performed as the artists like. You've done a few great turns there yourself! Interestingly I started off by just reading prepublished strips but for the performance you mentioned I created the strip knowing I wanted some sort of musical accompaniment. The strip doesn't really work without the music. We are planning the next DeeCAP in April as part of Dundee Comics Expo. I am not an accomplished musician by any means but I like to have a go and I know a few chords.
I am also a practising fine artist and have been part of several exhibitions across Scotland. I work across several media including murals, video, installations and print making, I'm especially partial to screenprinting. Much of my work is influenced by comics though, either by including comics language such as panels and balloons, or by actually being comics such as my piece on Sandford Fleming, the inventor of standard time, which was a 4 panel comic strip in which each panel was 1m x 1m. 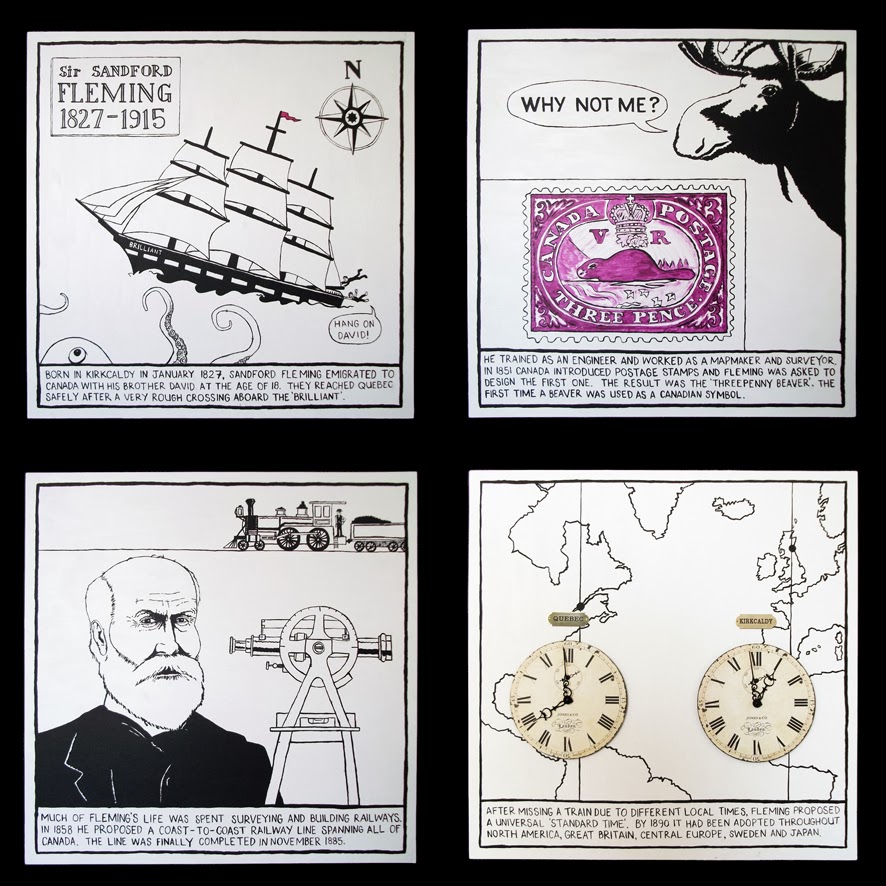 DR: How did you find the process of drawing "Why I Vote"?
DH: I enjoyed it. It was a pleasant change to work from someone else's script - difficult to do if most of your work is autobio! And it was an an insight into another person's way of working. If it's not cheating to do this, you can see my more detailed thoughts on collaborating with you in my post at Graphixia
http://www.graphixia.cssgn.org/2014/01/28/152-a-collaborative-dump/

One thing I didn't mention there though was the trying out of a new working method for me. Usually I pencil the page on Bristol board then ink it and then, once dry, I rub out the pencils. I recently got a lightbox and so this time I did the pencils on paper and used the lightbox to then trace the inks on board. No pencils to rub out on the finished art!
Can we expect to see more comics from you in the future?
Good question! I've put together my strips from 30 Days of Comics in November and should be printing that shortly. It will also be featured in Graphixia's 30 Days... epublication which should hopefully be available soon.
I've done a few strips for my studies which I will collect at some point but not until I have finished my PhD! It would be good to have another issue of Ticking Boy out by the end of the year but I might get lost in finishing my PhD, we'll see.


Have a look at www.damonherd.com for more information.
Posted by David Robertson at 10:04 AM