Beginning today is a series of mini-interviews with the guest  artists who are featured in Dump #2. First up is Stephen Boyd…

DR: Have you always been interested in comics?
SB: Yes.....and no. I grew up with Oor Wullie, The Broons (in Scotland it's kind of mandatory to read these as a kid and it's ok not to grow out of them), The Beano all those DC Thomson staples. Then I discovered Starblazer comics and would pick them up if the cover grabbed me, which was often because I love sci-fi. 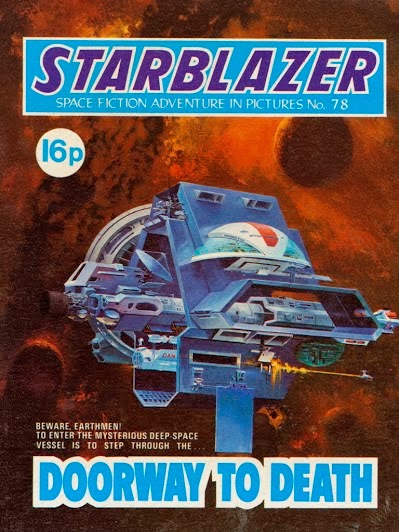 I used to occasionally pick up The Eagle and I bought 2000AD religiously. In my teens I really enjoyed stuff like Crisis, Strip and Toxic (while they lasted). I read The Sandman, Alan Moore and Akira as a student and then I got bored of comics. I'd look at what was made available to me in deepest darkest Dundee, but it all seemed a bit silly. Except for Maus, which blew me away, but as far as I was aware that was a one of a kind blip, so my interest in comics dried up for a few years. And then someone introduced me to Jaques Tardi's 'It was the war of the trenches' when it was released by Fantagraphics and that opened up a whole new world of comics that I'd been missing for all these years. I’ve been pretty much catching up since.
DR: You’re welcome. What had been your experience in making comics yourself before your contribution to Dump? 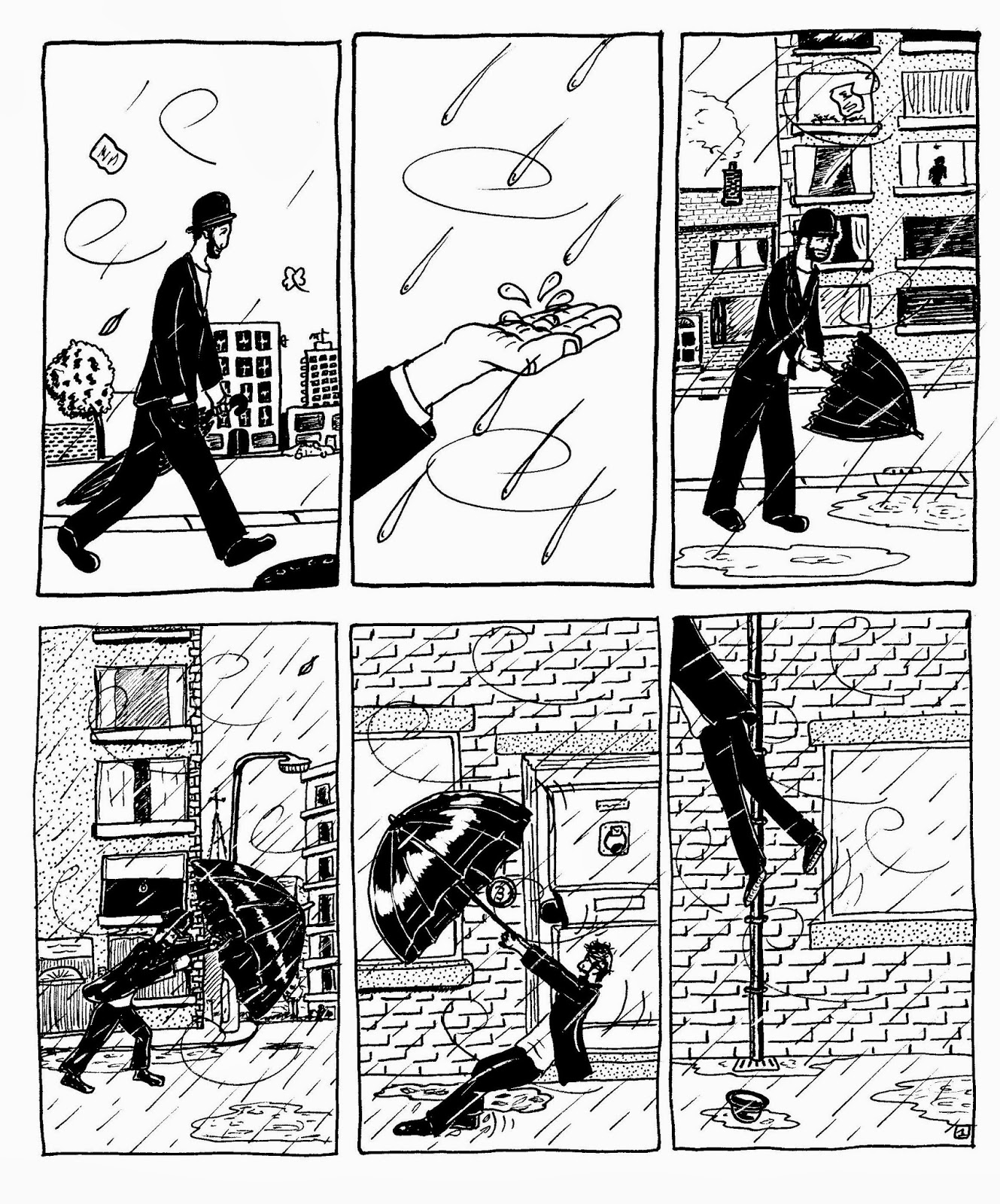 SB: It's actually been quite limited. I drew comics when I was a kid, silly little stick figures acting out jokes, but what 6-10 year old didn't? This carried on into my teens, mostly Viz knock offs and 2000AD inspired nonsense. I'd always liked drawing and did art at higher level but found the teachers at my school downright unhelpful, particularly if you wanted to follow a more graphic or comic bookish path. I left school with 2 highers, English and Art and always said I was only ever qualified to write and draw my own comics yet never got round to doing it. I still kept a hand in at the drawing, just as a hobby, while I pursued other interests, but the nearest I got to anything comics related was trying to learn to draw in the manga style. And that was it till my mid 30s. The relationship I was in at the time broke up and I found myself with a lot of spare time on my hands so I drew to stop my brain thinking. That drawing became the beginnings of a few comics that I never got round to finishing but had potential if I possessed anything amounting to an attention span. Of course, you and I worked together in the real world at this point and you saw much of the work I was doing, and did best at encouraging me to continue working on it. I intend to finish them off someday in the future or maybe start something else but I'm so busy just now with my nurse training. I still draw and my style has taken on a quicker, more sketch like immediacy, partly because I need to work in a hurry because life's so damned busy, partly so I can finish a piece before my attention span drifts off again and partly because I'm unashamedly trying to draw like Eddie Campbell.

DR: How’s the music going?
SB: Slowly, but well. I'm slowly putting another EP together but who knows when it'll be ready. Again its finding the time to record at the moment. I get a lot of false starts the way I make music. I write as I record so I never have that much of a notion of a finished piece at the beginning. I prefer it that way, much more exciting and organic. I like the chance to experiment while creating and it's hard to do that with too many pre-conceived ideas before starting. The more you prepare beforehand the less honest it gets I feel. You might have found that with your story 'Everything' I'm guessing. 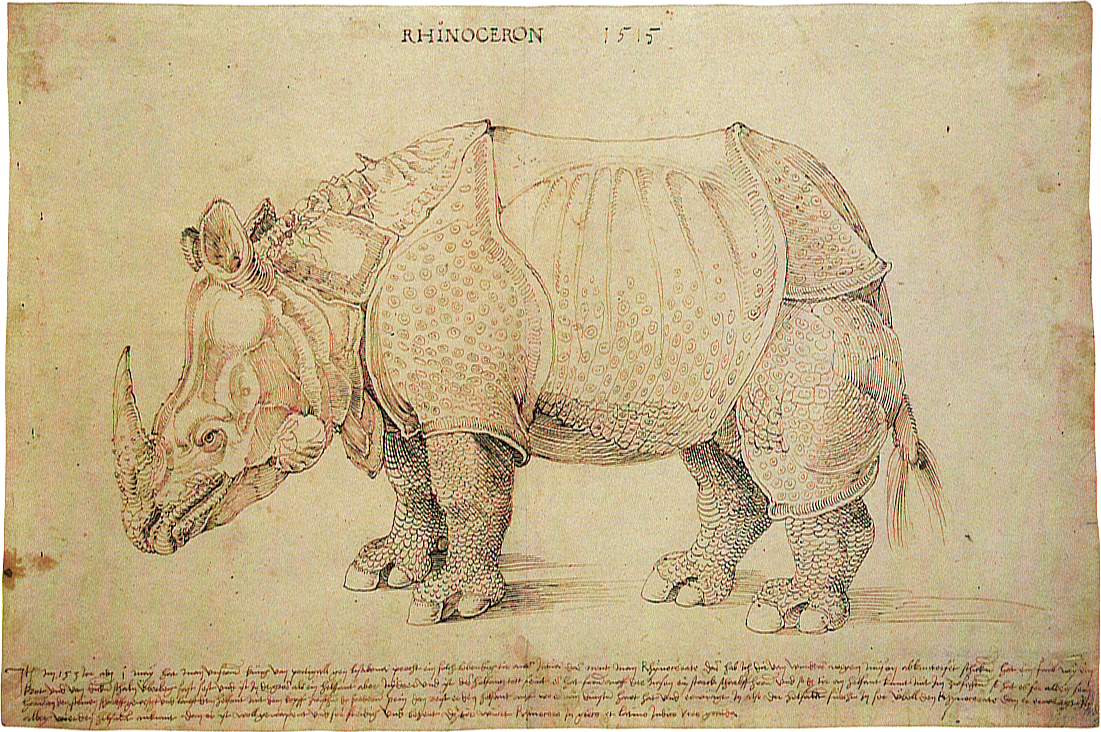 Anyhoo, I'm a big fan of the ethos of Sister Corita Kent, a nun who taught art and made posters in LA during the 1940s and all the way through to the 60s. She wrote these 10 rules for her schools art department to promote creativity  and includes gems such as 'Rule 4 - Consider everything as an experiment' and 'Rule 6 - Nothing is a mistake. There's no win and no fail. There's only make'. I like that idea. Sure it may result in creating something self-indulgent, but to a degree the very act of creating and putting it out there for others to see or hear is self-indulgent and I have no problem with that. My only problem just now is not following Rule 7 enough ‘The only rule is work. If you work it will lead to something. It’s the people who do all of the work all of the time who eventually catch on to things’.
DR: I suggest your next recording session should be done live with a bass player and drummer.
SB: I’m game for that. It’s one of the things you miss not being in an actual ‘band’, that spontaneity of jamming, the one time, never to be repeated performance. I listen to a band like Godspeed You! Black Emperor and think one person couldn’t possibly create that, music like that can only be made by a collective of musicians with a long enough runway but then you hear Mike Oldfield’s Tubular Bells knowing that it’s all the work of one bloke with a lot of time and dedication spent on his craft. There’s more than one way to do these things and I’d like to try them all out and see the end product of each of the different processes, for better or worse. As the good sister said, ‘Nothing is a mistake’.
DR: OK, let’s record our next jam then.
Unlike the other stories in Dump where I gave the artists a script, kind of, more exactly a page layout with dialogue, doodles and stage directions, I wrote Dream of Being You on top of your existing page of art. How was it seeing the finished page? Imagine I’m not me and answer truthfully.
SB: It would be an understatement to say that I was really pleased with it. It was the first time I'd ever seen anything of mine in print and I showed it to everyone I knew saying how I was technically a published comic book artist. Process wise, it was an odd way of doing the strip but I'd definitely do it again. I remember getting the e-mail to draw a page and thinking I'd love to but I just don't have the time. I had a collection of single page efforts and offered you your pick of those. Originally it was going to go in unchanged but then you asked if you could rewrite over it Marvel style (which I reckon you had planned to do all along) which I had no problem with. My story was OK but nothing special and certainly not something I was emotionally invested in. I much prefer what you did with it. 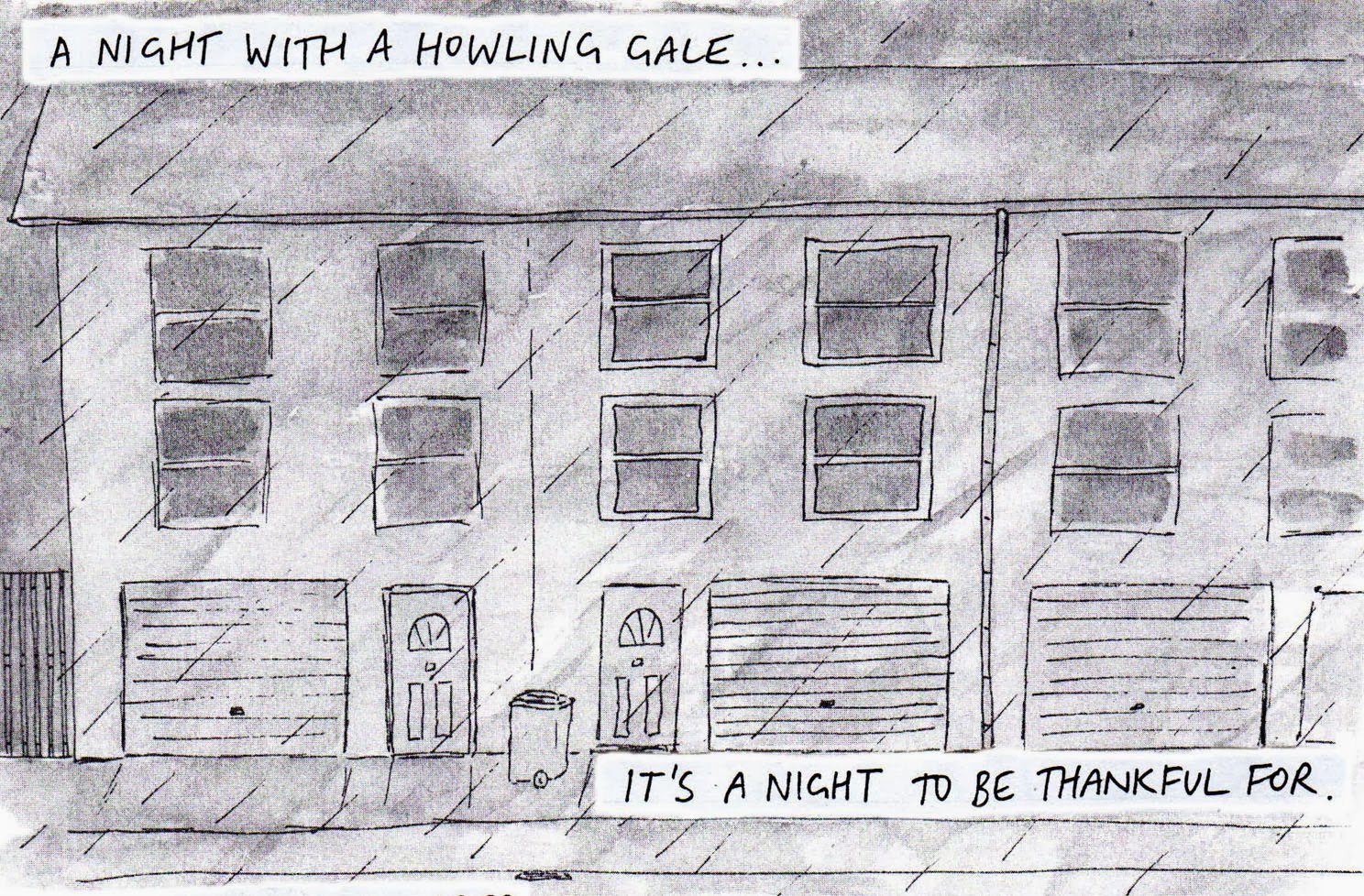 DR: I guess I have to answer your gentle accusation. When I took your page I was originally going to run it as it was. As I got closer to publication though, it did start to niggle at me that I had written everything in the comic except your page. It felt like your story was an oddity in there. It occurred to me that I could write on it, if you were OK with it. So no, I hadn’t planned it all along.

Anyway, just to confirm: Can we expect to see more comics from you in the future?
SB: Sorry about the cheeky wee quip, I have absolutely no doubt in your intentions and to be fair I would have felt the same niggle for exactly the same reasons. I get very like that with music hence my short lifespan in most of the bands I've been a part of. And as I said, your story was far better.
Now, to answer your question. I'd like to think there would be more comics out there with my grubby paw prints on them in some way in the future but who knows. I did consider starting a blog that was just single strips or instalments of stories, like you did with Berserkotron, and perhaps that will still come to something, perhaps not. What I can say is that there will definitely be another E.P. release by The quietest page before any future comics related work.

You can have a listen to Stephen’s music at http://thequietestpage.bandcamp.com/ and https://soundcloud.com/itsred
Posted by David Robertson at 2:32 AM