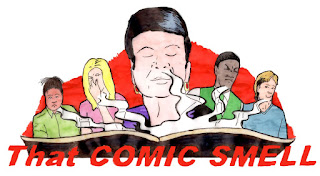 The new episode of That Comic Smell is now online.

From the web:
"Hey folks. Welcome to That Comic Smell Podcast. Let’s not beat around the bush here, 5 straight white males are about to sit around and talk female characters in comics… We know how it sounds. We really enjoyed it. With our very special guest there also, it was majorly fun. Yes, we are joined by the one, the only, Alan Henderson! (Other Alan’s are available) The brain behind the incredible “Penned Guin” comic strip series http://pennedguins.tumblr.com/ We also raid Alan’s mind for a while and get to the root of what makes him tick *Spoiler… penguins*
This and all the usual comics chat on the only comics podcast to hold the line… because love isn’t always on time, woah woah woooah…
That Comic Smell!"
Posted by David Robertson at 12:22 AM