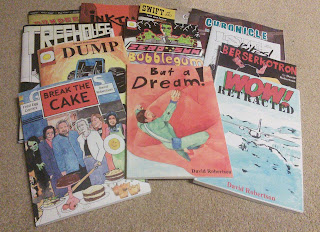 August 2019 marks the tenth anniversary of this blog, which seems ridiculous, but there it is.

It’s been good keeping this going, both as a record of what I’ve been up to, putting out thoughts on comics, and getting in touch with many great comics people.

I want to mark the occasion by running a competition. Up for grabs is every Fred Egg Comic currently in print. So that’s:

I will give away copies of some anthologies I’ve been in too;