MOUNT A RESCUE - OUT NOW 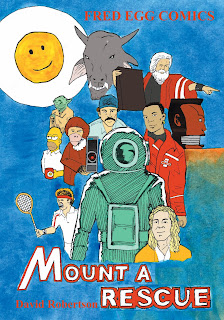 Mount a Rescue is available now from the Fred Egg Comics shop or at Comichaus.


“Los Angeles, November 2019” is a love letter to Blade Runner as we reached the date depicted in the movie. “Coming of Age” looks at digitisation of humanity. An individual walks among a submerged civilisation in “Water (load of rubbish)”. “India (and after)” is a sketchbook comic chronicling a visit to that country. And there's more! I have 18 different short stories written by me, with art by others as listed above, on topics such as butter, calculating probability, comics performance, creepy folks, forgiveness, generational conflict, Homer Simpson, movie stars, national radio news, nice smells, plush toys, pub quizzes, recycling bins, “right on” people, sleep apnoea, spacegates, true stories, and women’s faces.

Look for previews of the 35 stories coming over the next week.
Posted by David Robertson at 5:43 PM

Email ThisBlogThis!Share to TwitterShare to FacebookShare to Pinterest
Labels: Comichaus, Mount a Rescue