GET THEE TO A LIBRARY 3 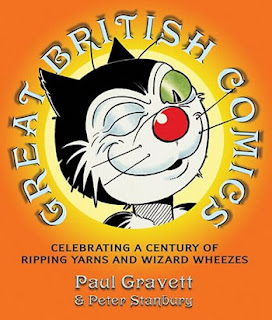 In my continuing mission to convince you to go to the library and check out what they have on comics which started here and continued here, I present Great British Comics by Paul Gravett and Peter Stanbury. This book is more recent than those other two, having been released in 2006.

Gravett is a comics publisher, historian and general enthusiast. His writing covers a lot of bases regarding comics, as he writes on nostalgia, comedy, super-heroes, self-published works and anything else he deems good. This book is a treat. It's jam-packed full of images from comics down the decades.

A few of my personal highlights: 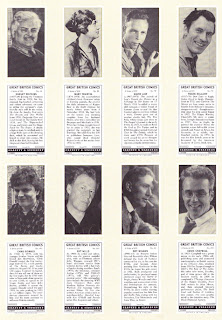 This is really neat. Near the beginning of the book, there is a set of comics writers and artists' bios presented in the style of old cigarette cards. A nice touch. 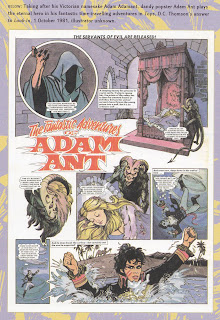 As I've never stopped reading comics and kept most of the ones I had as a kid, I rarely find any that I had forgotten about. This Adam Ant page though was like a bolt from the blue when I saw it reproduced herein. It's lovely art, but uncredited (it was published by D.C. Thomson after all). It actually reminds me of Walt Simonson, which sees highly unlikely, to say the least. Does anyone know who drew this? 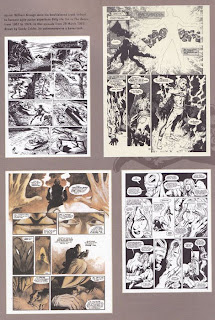 Look at this page! Three of my absolute favourites of the 70s/80s: Marvelman by Alan Moore and Garry Leach, Night Raven by Jamie Delano and David Lloyd and Captain Britain by Alan Moore and Alan Davis. That is value for money. The 1969 Billy the Cat stuff by Sandy Calder looks fun too.

Gravett is a tireless campaigner for comics. Check out his website. It is an invaluable resource in keeping on top of what's going on in the world of comics.
Posted by David Robertson at 1:20 PM