The Gaseous Brain website, as written about here, has produced a fanzine, covering a wide range of topics. It includes the following review:

Dump is a small press comic by David Robertson which brings together a number of short pieces most of which were originally produced by the author for other outlets.

The title may lead one to think that the comic contains some scatological humour, and ‘Contemplating Suicide While Someone Else Craps’ is indeed a one page piece with some very black toilet humour. 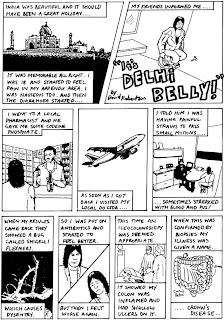 However, “It’s Delhi Belly”, a piece drawn for an anthology unsubtly called “Crap Your Pants”, is actually a sober tale about someone who finds out they’ve contracted Crohn’s Disease. It’s a factual piece which made me think it was autobiographical, but according to the notes at the back of the comic it was thoroughly researched and written with the truth in mind.

It also contains a story which is itself called ‘Dump’ which is not in fact a bathroom related tale, but about the protagonist of Robertson’s former comic Berserkotron starting a new job at a scrap metal yard / council dump. I sense that this is a story that could follow through to further issues rather than being standalone.

Other tales in the comic include one which considers how positive discrimination would affect humans in a Star Wars style universe where we have a relatively short lifespan, and an undisguised autobiographical account of a single day for the Hourly Comics Day project. Robertson’s unique way of thinking makes each story interesting, and is also evident in the section where he imagines the thoughts of the models from his life drawing class.

There’s something of Harvey Pekar in the straightforward and commonplace nature of many of the events, and the art is simple yet effective which perfectly matches the tone. If Robertson were to weave some more emotional aspects into his stories he could develop to be a storyteller to watch.

The Gaseous Brain fanzine is available now. For details, have a look here.
Posted by David Robertson at 3:30 PM