Beginning today is a series of interviews with the guest  artists who are featured in Zero Sum Bubblegum. First up is Eileen Budd…


EB: Yes, as far back as I can remember!


It all started with a road safety film with Tufty the Squirrel in it, projected on a wall in the town hall used for my playgroup. There we were, me and all the other kids sitting in the dark, staring at this blank wall, then suddenly they turned the projector on and the wall came to life. I was 3 and I didn't understand what a projector was, I thought it was some sort of magical device that could send a beam of light to burn through reality, revealing the secret lives of cartoons living in a parallel universe to ours. My mind was blown.


I was an incredibly shy kid so my mum was completely taken aback by how animated and expressive I suddenly became trying to explain what I thought I had seen. A road safety film? What? No! A portal into another dimension! She had no idea what I was babbling on about, I imagine it must have been similar to a cave man (or woman) seeing fire for the first time and having to explain it to others once it had gone out. (Mostly sound effects and arm waving.) But, she picked up some of what I was saying and gave me a Rupert the Bear annual. I was hooked. 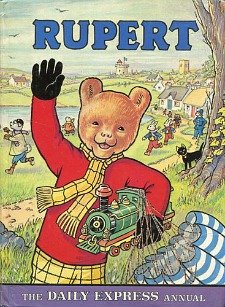 The comic book seemed like a low tech version of the projector portal, more of a newspaper version of another reality for those people who aren't playgroup leaders and can't gain access to a projector. And there wasn't just one other reality, I discovered.


Daily trips to the library with my mum and brother introduced me to the world of Asterix, TinTin, Garfield, Calvin & Hobbes. I borrowed them all. I became obsessed with writing and illustrating my own stories.


At primary school, my news jotters filled with stories about stolen vans and pigeon kidnappings, all highly illustrated with crayon and colouring pencil. I would ask other kids at school to do drawings for my stories and asked my family to write new stories I could draw for. I got a camera one birthday and started making photo stories, gluing the photos onto paper and writing captions for them.


In high school I drew comic strips of my friends, making fun of teachers and teenage life in a tiny farming town. It got me in trouble a few times but it was a massively important outlet for my busy brain. Still is.


Comics have always been this magical storytelling medium to me and ever since that wall projection of Tufty the Squirrel I've been trying to make art that tells stories and tell stories using art.


DR: That's a great story, and it was thoughtful of your Mum to give you a Rupert the Bear Annual.


EB: Yeah, I guess a projector was out of the question!


DR: Which work by other people are you a fan of, and has served as an inspiration?


EB: Moebius is a huge inspiration, The Incal is a masterpiece and something I re-read regularly. He's my number 1! 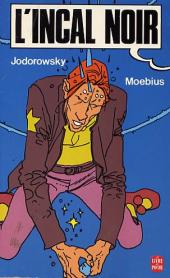 Winsor MacKay's Little Nemo in Slumberland and Bill Waterstone's Calvin & Hobbes. The artwork in both these comics is beautifully coloured and drawn and the daydreaming quality of the stories in both are pretty special.


Mike Mignola because I am a massive Hell Boy fan, I really like how Mignola writes too, not hung up on complex ways of keeping the action going, every now and then a ghost or zombie will just point the way.


Doug Tennapel's Earthboy Jacobus - I have read this so many times, I love it. I'm not going to talk about but if you haven't read it, get a copy.


Robert Crumb - the piece he did on Philip K Dick in particular is nuts and so well done.


Dave Sim and Gerhard for Cerebus. Gerhard's line work is superb, the backgrounds are stunning and the stories are ace.


Greg Hinkle, Airboy is a brilliant piece of writing by James Robinson and Hinkle's art is gorgeous.


More recently I've been looking at Greg Tocchini's work in Low because the colour palette is stunning and Zach Howard's art in Wild Blue Yonder - Its a good story and the artwork is really nice combination of things slightly reminiscent of 1950's WWII comic annuals.


I could go on and on before we even touch on the long list of fine artists and illustrators.


DR: What had been your experience in making comics yourself before your contribution to Zero Sum Bubblegum?


EB: My art practise is fine art and illustration, so before you asked me to do a strip for Zero Sum, artistically my experience of creating comic strips was pretty limited.


It's a medium I'm a big fan of so I've always felt I needed to take it seriously and learn more about the discipline and structure before I embarked on making anything I would let anyone else see!


Its only been this past year that I've really started openly venturing into making comic art, starting with a series of 10 strips called Lonely Hearts From History commissioned by the Curator of Comedy website. 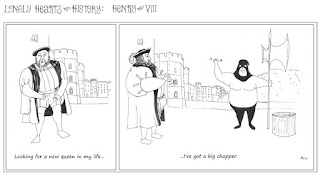 I've also been working on a couple of projects of my own, which hopefully you'll see more of towards the end of the year.

DR: What can you tell me about the comics projects you're working on?


EB: Err, not much right now, but once I've finished this first chapter I'll be ready to share it, so check back in with me in two months time!


DR: How did you find the process of drawing your story for Zero Sum Bubblegum? Any behind the scenes insights to offer?


EB: Insider insights, eh? When I got the script for Zero Sum I started thinking about the photo stories I used to make, the overly posed, awkward teenage acting. It’s that kind of freeze frame action you might create in your mind when you’ve lost an object and are trying to remember where you put it. I wanted to use a bit of that and give it a slightly nostalgic feel. 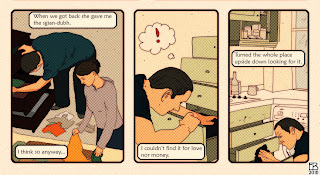 So, I got my partner and friend to pose for me while I was working on the character artwork, which was really good fun. A lot of leaping around the flat and pulling faces and a couple of times when I was asked, in total seriousness, “What’s my motivation?” teehee. And, while digging through the kitchen drawers, my method actors found a long lost cookie cutter!


And you used to make photo stories? What context were you doing that in?

Eileen Budd is a freelance artist / illustrator from Edinburgh and a serious
comic book fan. See http://www.eileenbudd.org/ When not making art she's
writing about it on the artist run website redbirdreview.com. Get in
touch with her at artist@redbirdreview.com
Posted by David Robertson at 2:18 AM