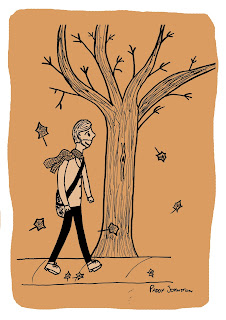 PJ: That's a great question, and it isn't always one that people ask. I guess the answer for me is yes and no. The foundations for a love of comics and cartooning were laid when I was young - some of the first things I can ever remember reading are Beano annuals and Tintin books. Our local library had a really great kids section with the Tintin rocket bookcase, and I remember working my way through all of those. When I was a little older, I guess it would have been 1995, I got a Sega Mega Drive and got really obsessed with Sonic the Hedgehog, which had an amazing series of comics attached to it. I don't think I appreciated the power of comics at the time though, as when I hit my early teens I wasn't really reading comics at all. I never got into the superhero stuff, so perhaps if I had that would have sustained me through my teens. But once I started devouring prose fiction - aged around ten, I guess - I didn't read comics much. I liked to doodle, but I was doing terribly at art at school, and I turned to music instead. The focus I had on that didn't leave much room for comics! There were a couple of fantasy adaptations I really liked - Wenzel & Dixon's The Hobbit was one - but mostly I wasn't that bothered.

Comics were always ticking away in the background, though. When I hit my late teens I noticed that my dad had a lot of graphic novels around, and that was when I started getting interested again. I got hooked after reading issue 13 of McSweeney's, which was a comics special edited by Chris Ware. It blew my mind. There were short excerpts from Jeffrey Brown, Charles Burns, Lynda Barry, Daniel Clowes, Julie Doucet, Seth, The Hernandez Brothers, Adrian Tomine, Debbie Drechsler. But it also had essays on the form and its history. It was the first time I appreciated that it was its own art form with its own vibrant heritage.

This got me obsessed with comics again pretty much exactly when I turned 18 and went away to university, so that coincided with wanting to study comics but also with a huge expansion in my reading of them - I tried to make up for lost time! I eventually started drawing again when I was around 20, after reading people like Jeffrey Brown, James Kochalka and John Porcellino, who didn't focus on the technical skill (which I was convinced I didn't have and am still a bit dubious about). 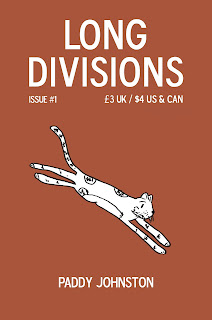 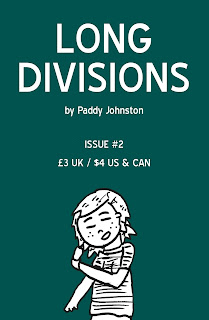 DR: Modest as ever! McSweeney's 13 was an important book. It's good to hear the positive impact it had on you. Tell me about the comics you've made since you started up at age 20.

PJ: My undergraduate years (2006-2009) also coincided, I think, with a real peak in the quality and prominence of webcomics. As well as graphic novels, I was reading a lot of webcomics - American Elf, Scary Go Round, Octopus Pie, Questionable Content, Hark! A Vagrant, Templar AZ, Girls With Slingshots, etc. So my first thing was to try and do a webcomic and to just learn by doing, after practising drawing by making gig posters for a club night I ran in Exeter called Lofi Hifi. I set up a shitty Wordpress site and called the comic "Low Fidelity." It was autobiographical, mostly lame stuff about DJing at the club night, being in bands, listening to records, that sort of thing. I deleted the site a few years ago but you could probably find it on some internet archive if you had the inclination to!
I stayed on to do an MA in Creative Writing in 2010, and was lucky enough to have a supervisor (the criminally underappreciated novelist Sam North) who fostered my interest in comics and encouraged me to draw a graphic novel for my MA thesis. I did this and somehow passed, even though it was terrible - knowing nothing about how to really draw properly, it was all in 2D perspective and the story totally ripped off Scott Pilgrim, which was huge at the time. It was called Small Town Heroes. Again, the few printed/digital copies have been erased as best I can, but I'm sure you could find one if you dug hard enough. 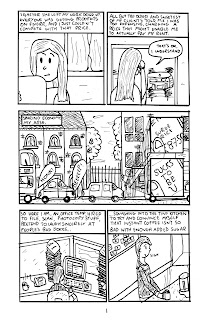 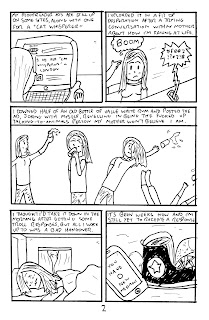 The next few years were slow. I was working, playing in bands, doing other stuff, but I knew I wanted to draw and also that I wanted to study comics. So I started a part-time PhD in comics (technically it's in English Lit, but hey) in 2012. It's not a practice-based PhD, but my supervisor has encouraged me to included elements of my own comics. So through that I started drawing more and writing more, and eventually I deleted all my old comics and started posting new ones on Tumblr and eventually Medium - just short stories and mostly autiobio, but some fiction. I started taking part in challenges including #30dayscomics and Hourly Comic Day, which I found really helpful in pushing myself to create things. Strict constraints can necessitate great art!

These short comics became the foundation for more ambitious work, and in 2014 I released the first issue of my now ongoing comic series Long Divisions. It's about millennial problems, explored through human-cat relations. And the cats can talk. I've always been a sucker for talking cats. I'm working on issue three right now and have no idea how long it will go on for, which is both scary and incredibly liberating. I know the narrative arc in my head, but it leaves a lot of room for invention. 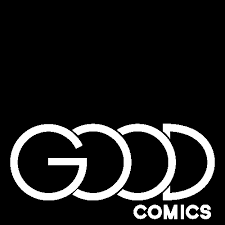 Recently I've founded the micropublisher Good Comics with Samuel C. Williams and Pete Hindle. We put out the first issue of an ongoing zine called Dead Singers Society last year, and issue 2 debuted at this year's DIY Cultures Fair in London (with a wicked contribution from none other than David Robertson). We're launching properly at Thought Bubble this year, with new comics from the three of us and a whole roster of up and coming British talent.

PJ: Yeah, hopefully see you there! We have a full table rather than a half, so that's exciting.

DR: How is your music going - and any other artistic pursuits?

PJ: Music is ticking over slowly. I've been in quite a few bands over the years, but my most recent one (Palomino Club) is probably the best. We released our debut EP at the end of last year and had an amazing sold out launch show, and now we're planning a tour and a follow-up and trying to write some pop hits. That's the hard part. I'm also working on a concept album about the arctic, which is a solo project. I've written about 15 songs for it but can't find the time to record them!

I used to write poetry and flash fiction, and once I hand in my PhD thesis this summer I'll have a lot more time on my hands, so I think I'm going to get back into writing prose fiction. From a very young age I wanted to write novels, and obviously that was a big part of my MA studies. But I'll probably just end up vegetating and watching old baseball clips on YouTube or something. 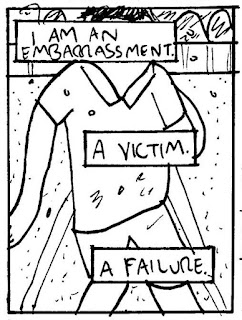 DR: Seems unlikely, knowing you. How did you find the process of drawing "Victory Lap" for Zero Sum Bubblegum?

PJ: I really enjoyed it. I think, at least to my immediate memory, that it's the only time I've ever drawn a comic that somebody else has written. Sam and I are collaborating on a forthcoming 60s folk/spy thriller comic that will blow your mind, but the division of labour is more fluid with that. I spend a lot of time on writing, thumbnailing and pencilling when I draw my own comics and tend to get to a place where I'm happy with them, but I still think about the writing when I'm drawing. Without having to think about the writing, I think it made me much more able to be expressive with my drawing. I think the quality of the lines show this, if you compare them to Long Divisions #2 or something else of mine. I love that you provided detailed panel breakdowns, but they didn't feel so rigid as to feel restrictive.

DR: I've found different artists want different things from a writer and figuring that out with the individual is interesting.

PJ: Definitely. I've enjoyed finding that out for myself!

DR: To finish off, I'm interested in anything else you want to tell me about your upcoming comics projects.

PJ: I'm really excited about Dead Singers Society 2, having persuaded some very cool artists to do comics for it. Sam and I collaborated on a comic for that as well, drawing panels side by side, so that was interesting. We're each took on a different dead member of the same cult band. I won't say which one! As well as LD2 I have a more ambitious solo comic I'm working on, which follows on from my #30DaysComics story from 2014 and explores another avenue of my comics interest - the Scandinavian landscape and the potential for magical realism there. It's vaguely influenced by Tove Jansson, but it's a human story at heart. And it still deals with millennial problems. I'm trying to be seen as a talking cat guy less, but I don't think I can get away from being a millennial problems guy. 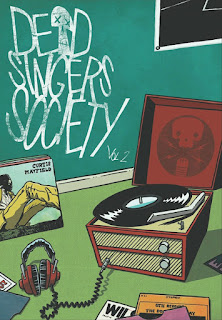 Paddy Johnston is a cartoonist from London. He is the creator of the series Long Divisions and the co-founder of Good Comics with Samuel C. Williams. As well as drawing comics, he also studies them and is currently finishing a PhD on comics at the University of Sussex. http://paddyjohnston.co.uk

Zero Sum Bubblegum is available here.
Posted by David Robertson at 12:33 AM