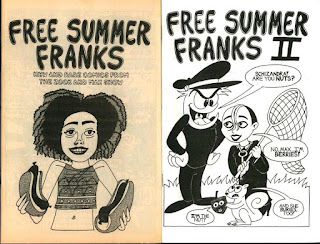 DR: Have you always been interested in comics?
TK: Yes.
DR: Okay. Which comics do you first remember reading?
TK: The earliest memory I have is reading a comic book about a bird talking to a bunch of kids. I think he looked like Sonny from Cocoa Puffs, and for all I know it was an ad, but probably not. I was always obsessed with the ads, the ones for the patches of all the '60s and '70s artwork. I still buy the old comics (Tom and Jerry, Sad Sack, Archie) for $1 out here in Bellmore at the outdoor flea market. 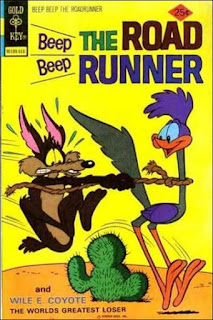 So, I bought a Road Runner comic from '75 the other month, and I look at the address to send away for the gag gifts and the building where they used to sell them is on the other side of the train station, walking distance from the flea market. I find that hilarious.
DR: Ha! That is funny. Which work by other people are you a fan of, and has served as an inspiration?
TK: As a teenager, Mike Kazaleh (The Adventures of Captain Jack, before Ren and Stimpy) and Peter Bagge were my favorites. I haven't seen much of Mike lately, probably the DVD art for Bakshi's Mighty Mouse was the last, and I haven't bought a Peter Bagge book in years. I saw Pete years ago at a comic book convention, and he was so enamored with my girlfriend at the time that he signed my book "TO NYC". I thought, well, that's the last time I buy his work!
DR: I guess he's only human. What had been your experience in making comics yourself before your contribution to Zero Sum Bubblegum?
TK: I've been self-publishing for 30 years. I started out using the copiers at my high school, breaking in at night (which I don't recommend), and from there I used a copier in a music store where a friend worked, then Minuteman Press, and I've been using Staples for decades. My latest 8-page mini-comic is a jam I did with my pal Joe Meyer. I was going to call it VHS PARTY, but then I got an email for an event called TIM + JOE DO A TERRIBLE JOB so I just gacked the flyer for the cover. A bit of thievery, but free publicity for them. 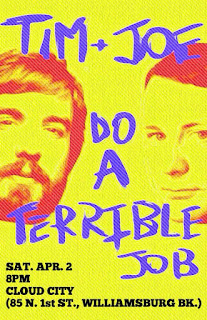 DR: That using the photocopier at work story seems to be a bit of a rite of passage. What other artistic pursuits are you involved in?

TK: I've been making films with my brothers for about 15 years now. The latest is the pilot for my brother Terence's web series Graves. One of Alan Arkin's sons was supposed to be in it, but something came up so I got the role, as the owner of a comic book store. We've also been filming puppet shows of my characters Zook and Max for a little over a decade. 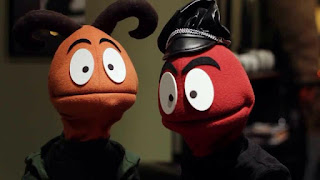 My brother Brian did two on actual film, one in black-and-white and the other in color called Two Princes and Loving the Alien, and I finally scripted one a few years ago called Zook Me, I'm Clean. Joe Meyer has a great cameo in that one, and they're all on my YouTube channel.
DR: Didn't you do a Jar Jar Binks one?

TK: Yes, Interview with Jar Jar Binks, starring my brother Brian as Jar Jar. I love how I say "Thank you, Jar Jar" and he goes on for another solid three minutes. 7 1/2 minutes total, no script, and the whole thing's hilarious.
DR: How did you find the process of drawing "The Joy of Stamps"?

TK: Well, to set the mood I put on Grouper's AIA. I'd heard a few minutes of it in an art supply store up in Woodstock a year ago and thought, "I have to draw to this." Music has always helped me focus, otherwise I get too distracted, and that album is like listening to my own mortality. So, I got to work. Used a ruler for the panels, not that you can tell, and then I did the lettering and the drawing. Fortunately, I'd happened to find a Rolling Writer, my favorite pen, that was still in the packaging from years ago. I feel like I must have bought it back in the '90s, and it worked beautifully, just like the old days. I've got to send away for more of those. I never see them in stores anymore.
DR: Things are certainly changing. There are cartoonists now who never touch pens and paper. Are you ever tempted to get involved with the more computerised side of things? 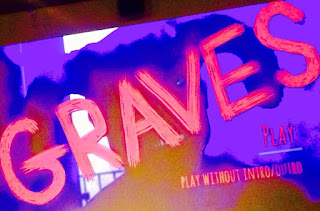 TK: Only for coloring. I haven't had Photoshop in years, but it's on my to-do list. When I drew an EP cover a few years ago for a girlfriend, the same one who's in the last puppet show, I had to ask Joe Meyer to color it for me. I just told him to rip off the colors from the Tom and Jerry cartoon I was ripping off, and of course he did a beautiful job. Actually, that drawing is interesting because it's the only time I ever pencilled before inking with a Rolling Writer.
DR: You don't usually pencil? That may help account for the energy in your drawings.
TK: Thank you. I have pencilled a bunch of stuff, but always inked with other pens. The comics about my daughter Emily (Springtime for Autism and Summer of Nove) were pencilled, except for the cover of the first one, which I traced over a rough sketch. I usually don't do that, either! 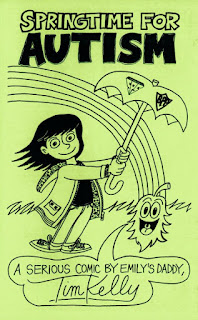 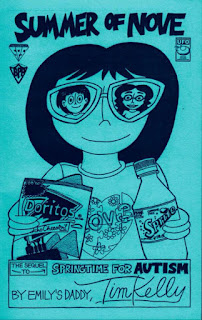 DR: Are you working on any comics at the moment?

TK: I'm always writing, planning several projects at once. I'd like to get something done in time for the East Hampton Pop-Up Comic-con on Sunday, August 7th. I've got a couple of scripts I could choose from. Also, Joe's friend Lindsey made these groovy rubber stamps of Zook and Max, so I was thinking of doing a mini-comic just using the stamps. Kind of like a Brien Wayne Powell comic, which are always hilarious, in the sense that each character only has one image that is repeated forever. I suppose if Andy Warhol had done comics, they'd look like Brien's, but they wouldn't be as funny. 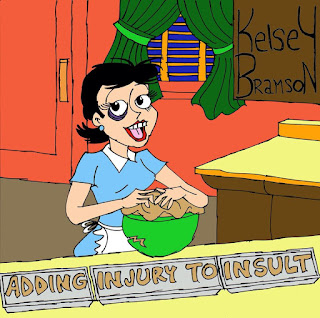 Tim Kelly has been drawing for 40 years, self-publishing for 30, a Daddy for 20, and doing puppet shows for 10. He has also appeared in films.

Zero Sum Bubblegum is available to buy here.
Posted by David Robertson at 1:22 AM