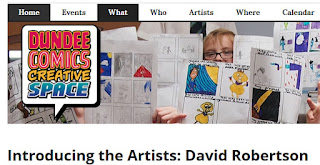 The Dundee Comics Creative Space has had intern Caitlin Mitchell for the past two weeks and she has been interviewing the artists who work there.

I took my turn, and here it is now at the DCCS website.

Here is the next in the series of profiles of our DCCS artists – meet David Robertson!

Tell us a bit about yourself.

My name’s David Robertson, my age is 44 and I’m from Dundee.

What made you want to become an artist?

Well, I always liked drawing and I’ve always read comics so it was just natural to start making my own as well as reading them. I remember reading things like Hulk, Star Wars, Spider-Man, The Dandy. Up till now, comics is more what I’ve done in my spare time. I knew Damon prior to coming here so when he got the job I told him I was interested. I’ve always made comics so this is a good place to come and do it.

Do you have a preferred style of art?

I guess I’m old fashioned – pencils, paper, and ink. I do use computers and digital stuff for certain things – scanning artwork and tidying it up. But primarily I work the old fashioned way.

What do you enjoy doing in your free time?

Apart from making comics, I listen to podcasts and also make comics podcasts. I’m just starting to get into that. I like watching telly – I like Columbo!

What is your favourite comic of all time?

That’s a difficult one. I’ll say two that my sons made – The Concorde story and The Stick Guy. My sons are 10 and 7. The Concorde Story is a factual comic about the plane. The Stick Guy is a day in the life kind of thing – a man having everyday adventures.

What is the best thing about working in DCCS?

It’s good to be involved in the Dundee comics scene, which seems to be growing all the time. That’s really good. Also when you make comics a lot, you’re kind of sat in one room for hours and days on end so it’s nice to get out the house and come and meet people with similar interests. I do enjoy doing the workshops with the kids – they have great ideas.

What are you working on at the moment?

Today I was working on a new comic, a one pager, called The Making of Space Film Episode 7, which I’m hoping will be in this magazine called Star Jaws. I was pencilling that today. Yesterday I was doing a story with my son who wanted to do another one called Shopping for Tuna. He told me what the story was, while I planned out how it would be on the page. That’s been done over the holidays and I need to draw that up now. I’ve got an ongoing web comic that I do called Bell Time which goes up at the Redbird Review website. I’ve just released my own comic called Zero Sum Bubblegum. I just make comics all the time, I never stop – so I never know what I’m working on, what’s just been finished, what’s just been accepted or rejected, what’s just been published. I do stuff for Treehouse comic regularly. I’m also collecting together my first two mini comics that I did, and putting them into a book called Berserkotron and reprinting it. I want to get that done for this year’s Thought Bubble which happens in Leeds in November.

Finally how can we follow you on social media?