For a few weeks, I'm running a series of guest posts from my friends over at That Comic Smell podcast. The pieces are any length, style, whatever. The only brief I gave was to write something about comics. This time around, it's Mike Sedakat. 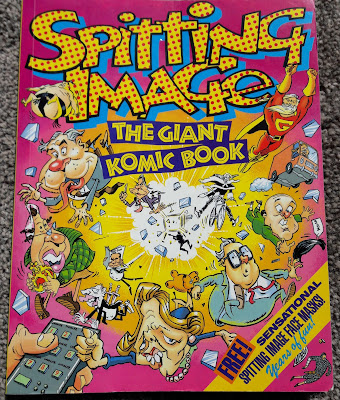 Imagine the setting, the end of the Cold War, the height of Thatcherism and outrageous styles and fashions! It was 1988, I was 10 years old and spotted a graphic novel based on one of my favourite tv shows – Spitting Image on top of a table in a supermarket. I begged my mum to get me it and she did, thinking that because it was a big comic book alongside stuff like My Little Pony and Care Bear books that it was safe for kids! My parents always let me watch Spitting Image as this really helped my grasp of politics in the 1980s (the show’s absence from today’s satire scene is all too obvious), however, when we got home my mum was outraged to see the extreme nudity, swearing and complete filth which I so easily adored (I was a mischievous schoolboy). She confiscated it and within a few hours I found it on the top shelf of her cupboard. I pinched it back and it remained hidden under my bed for decades (even when I’d moved out of home!).

This book is the work of several comedy geniuses and is a much more honest look of the world back in the late 80s than many a textbook now. Ronald Reagan dressed as a gun-wielding cowboy about to shoot the big pimple off a pensioner’s nose, Jeffrey Archer being shrunk and being plopped out of Thatcher’s bottom and an SAS soldier assassinating characters throughout the book. That said, there is no real overall story to the book, it’s a bit like a Viz comic or an adult version of The Dandy or The Beano. There are many nods to sci-fi here from Restaurant Reviewer John Hurt having a polite alien burst out of his chest to a time traveller who aims to visit Victorian Times, disgusted by the horrendous poverty and corruption only to discover he’s only zoomed a week into the future when he sees Anneka Rice on the telly! Fans of the show would love to see the Robo-cop PC Dimbleby. 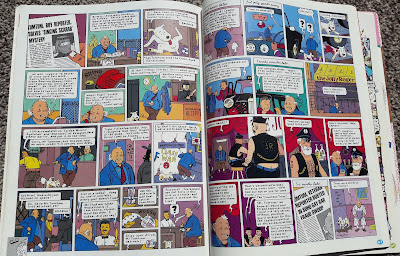 The world of comics is represented in the piss-take of popular culture. Tum Tum is a crude adult Tin Tin drawn in the same way. Tum Tum is a complete drunken bastard who would stoop as low as he can to get a scoop. Seeing him pissing on the wall after being chucked out of his flat by his landlord is absolutely hilarious! Judge Deaf is of course a parody of 2000 AD’s favourite lawman, but more scary (imagine Dredd wearing a judge’s wig while riding a bicycle). Deaf’s biggest problem is not being able to hear anything so when someone calls for his help, the Judge shoots him for shouting in a public place! This story is filled with gems such as: “MORNING JUDGE DEAF!” “How dare you call me a moron. Ten years hard labour.” And “Loitering in a public place. I sentence you to death.” “He’s already dead, Judge Deaf. You had him hung a week ago for not knowing the cricket score.” 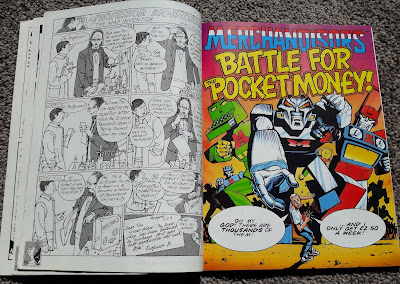 Johnny Onejoke is based on a combination of Dennis the Menace and I think a real comedian who I haven’t been able to figure out yet! The Transformers are taken the mickey out of by the Merchandisors TM. No story, just a bunch of robots that want to fight each other for absolutely no reason at all! Sound familiar? The appearance of each robot is signified with the price of the toy version. Dare I say that Superman is er,,,, parodied by the show’s version of God. This has to be the bravest (or most reckless depending on your point of view) story in the whole book! The Adventures of GOD The Ultimate Super-Hero shows disasters about to happen such as a train crash, a plane crash, the Chernobyl eruption and mass famine with people crying out for God to help them before they perish. The show’s version of God appears in the last caption (dressed like a super-hero) stating that having given mankind free will, it would be wrong to interfere. I’m not sure if given the current social climate if a book like this would be released again. I could be wrong.


All in all, Spitting Image: The Giant Komic Book is certainly a good laugh over most of its pages plus it is a no-holds-barred piss-take on everyone in the spotlight at the time. There are some extremely controversial stories, but mostly it’s a well-informed look at politics and popular culture in the 1980s and I wish the show would return to our television sets soon. 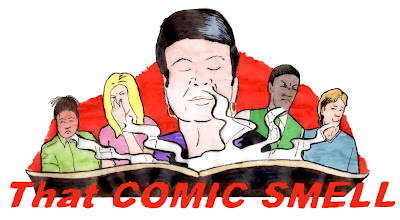 You can listen to That Comic Smell podcast at iTunes, Soundcloud and YouTube.
Posted by David Robertson at 4:02 AM