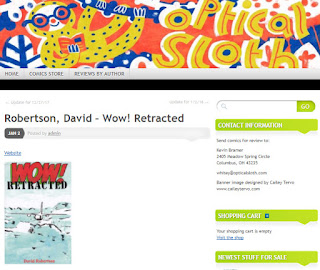 "To every comics artist out there who worries endlessly about putting out comics on a regular basis, you could do a lot more than emulating David. The bulk of his stories are short, usually only a few pages long. This lets him submit comics for all kinds of anthologies, and every year or so he has more than enough material to put out a book of his own. See how easy it is? Granted, lots of artists only deal with larger stories, but at least having the ability to work on shorter stories would be a nice change of pace for whenever you get stuck on whatever epic you’re working on. So hey, enough of the life advice, how about this comic? The bulk of these 40 (!) stories are written and drawn by David, with about a dozen of them coming from other artists. There’s no central underlying theme, just a big old pile of stories about all sorts of things. OK fine, his “I Live With a Killer” stories (about how his cat brings him pieces of various animals it’s killed) have a connecting theme, but they’re the exception here. Other highlights include the final thoughts of thelast two survivors from a plane crash, our first encounter with aliens, petty space station revenge, the man who’s always falling in love, the story and fate of Dolly the cloned sheep, a story of a missile attack (written by his son I think?), the concept of putting people in concerts who just want to talk for the whole show in their own section, exactly how much of your life you waste on vacuuming, skipping an internet video only to see it on the actual news later, a comic about making a comic that sort of eats itself (drawn by Zu Dominiak), the story a mouse brings back home after nearly being eaten, the robot and the monster, and the inner lives of a couple of flies. That’s what, not even half of the stories here? It’s another pretty fantastic bunch of stories from David, and if you’ve somehow gotten this far in life without seeing his work this is a solid chunk of comics to start with. No price listed, so I’m going to guess the arbitrary number of $10. Contact David and I’m sure he can set you straight…"
Posted by David Robertson at 3:44 PM