GET THEE TO A LIBRARY: GORGO

This is the BIG one!

Another great thing to do at your local library is have a dig through the newspaper collections. On a recent look through local press I found this 1962 advertising strip for the monster movie "Gorgo"

Quite nice actually. I wonder who drew it? I remember strips like this advertising movies 20 years later for things like "Clash of the Titans".

This paper had another delighful feature. Design Gorgo's head.

Looks like the same artist. I got curious and a referral to Phil Hardy's Encyclopedia of Science Fiction Movies got me a look at a photo of the big monster. 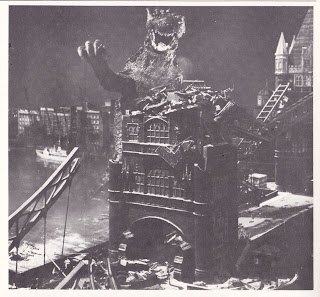 Comics were used a lot more in the past to advertise anything and everything. I'm looking forward to chancing upon more of them.
Posted by David Robertson at 3:09 PM 3 comments:

Email ThisBlogThis!Share to TwitterShare to FacebookShare to Pinterest
Labels: Gorgo 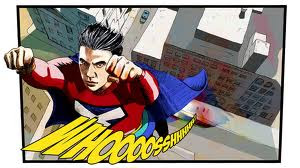 A new documentary aired Monday past. Have a look here.
Posted by David Robertson at 3:12 AM No comments: 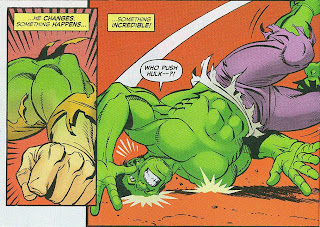 There's a nice Marvel comic out now called "Incredible Hulk & The Human Torch: From the Marvel Vault". It's a first printing for a story pencilled by Steve Ditko in the 1980s to serve as a filler for when the regular arist on Marvel Team-Up missed a deadline. However it was never needed before that series came to an end in 1985.

So now it's out and has been re-scripted by Karl Kesel who also inked it - recently. He writes a suitably gushing and proud introduction wherein he tells of his excitement at drawing over Ditko. He also says he's very fond of the character Johnny Storm and misses him now that he's gone, so he must be dead currently in Marvel Comics. It's great to see Ditko's Hulk back in sequences like the first one shown here (click for larger version).

I found the computer colouring really strange over Ditko's work. The story looks like his 80s work apart from that. The new writing from Kesel too throws in modern references - such as the one shown here to Youtube. 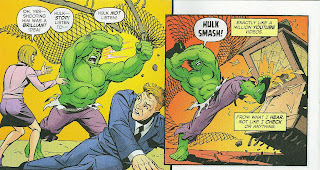 P.S. Bonus bemused chuckle: The numbering on Marvel comics has become rather convoluted. There's an ad in this mag for a comic called Iron Man 2.0 #7.1
Posted by David Robertson at 2:48 PM No comments: