In preparation for the 24 Hour Comics Day in Kirkcaldy this Saturday, I've knocked up a Fred Egg Comics card... 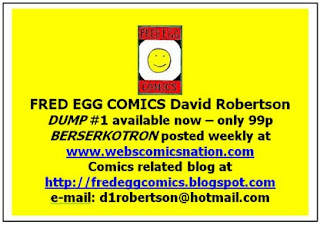 Posted by David Robertson at 12:50 PM No comments: 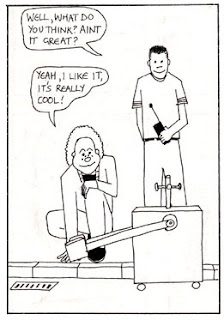 This week's page is now up here.
Posted by David Robertson at 2:15 PM No comments:

Email ThisBlogThis!Share to TwitterShare to FacebookShare to Pinterest
Labels: berserkotron

Another surprise in a regular book shop. At The Works – a remaindered book store in town – there is a selection of trade paperbacks / graphic novels / comics on sale. 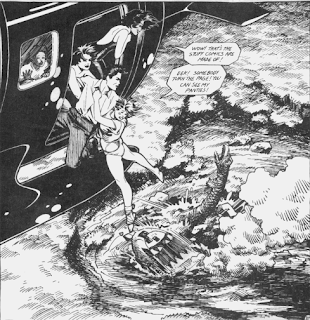 Superman – one of the stories written by John Byrne

Most strikingly, there are 4 volumes of the recent Love and Rockets collections by the Hernandez brothers.

What is in one branch tends to be replicated nationwide, so go and check it out.

Posted by David Robertson at 1:48 PM No comments:

I first heard of 24 Hour Comics Day years ago as a scary idea from Scott McCloud. A day is chosen, and around the world, cartoonists do a 24 page comic in 24 hours. That's normally months of work. Terrifying, but an intriguing notion that has niggled at me ever since.

In 2007 I sat in at the beginning of the event in London out of curiosity and found that I didn't want to leave. I wanted to join in.

So this year, the new comic shop "Kingdom of Adventure" in Kirkcaldy is hosting an event. I've thrown my hat into the ring, risking exhaustion, hallucinations and possible insanity.

Wish me luck...
Posted by David Robertson at 1:15 PM No comments:

Something is going on in Borders. 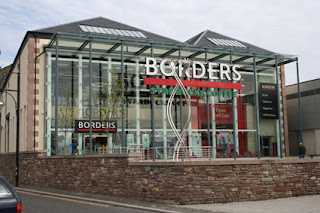 They actually have US Marvel comics on sale, which is nice to see.

As far as I can remember, that's the the first time Marvels been available to people outside comics shops in the UK for about fifteen years. Up til 1994, Comag was distributing them - complete with fairly huge stickers plastered on the covers.

Along with their carrying Crikey!, this shows a new interest in comics is happening at Borders (they already had a pretty good aisle or two of graphic novels). Borders is charging a fortune for single issues though - I'm pretty sure some of those single issues cost £4.25, which is a lot to ask for an impulse comics buy.

In the UK, these US originals have to compete with British comics that reprint up to 3 US comics from a couple of years ago. These collections are all colour, cost about the same price or cheaper, and are a lot thicker.

And the US originals still have a big sticker stuck on front too.

But it is part of a pleasing trend on the part of the chain. Long may it continue.
Posted by David Robertson at 3:29 PM No comments:

Iron Man visited "Glen Travail" in Northern Scotland in 1982, in a tale by Dennis O'Neill and Luke McDonnell. A couple of scenes: 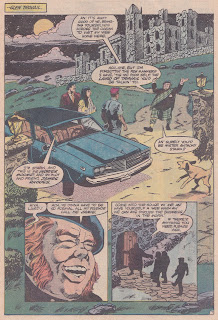 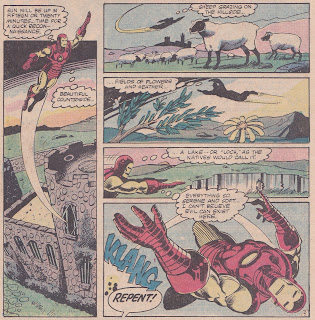 Posted by David Robertson at 1:40 PM No comments: 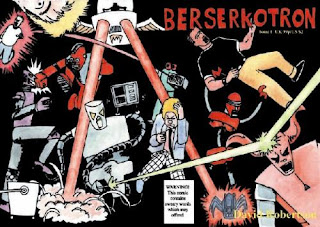 To read it, follow this link.
Posted by David Robertson at 1:05 PM No comments:

Email ThisBlogThis!Share to TwitterShare to FacebookShare to Pinterest
Labels: berserkotron

First up is Ron Wilson, who did very little Hulk as far as I know, but I love what he did in the late 70s... 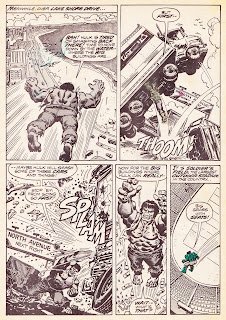 Black and white, as it appeared in the British magazine I read it in, but 7 year old me has helped by colouring the Hulk figure using watercolours in panel 2 and a felt tip pen in the last one.

Okay, now let’s have Hellboy creator Mike Mignola’s work from the mid 80s. Mignola took over the comic when Sal Buscema left. He stayed around long enough to draw “Monster”, one of the all-time great Hulk stories. Here's the splash page... 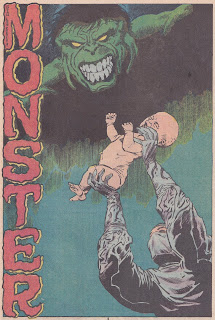 John Romita Jr. took after his dad and became a Marvel artist, beginning in the 70s. He’s done good runs on X-Men and Spider-Man. By 2001 he was on the Hulk, and again he did good solid work... 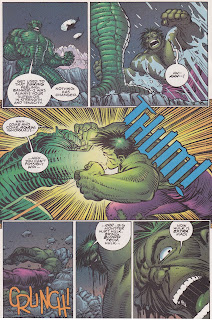 In 2003 Bruce Jones was writing the comic. He wrote it as a mystery, with Banner on the run, rarely showing the Hulk, etc. Around the time of Ang Lee’s movie a slight change of pace ran in the comic – a story drawn by Leandro Fernandez. I like his style... 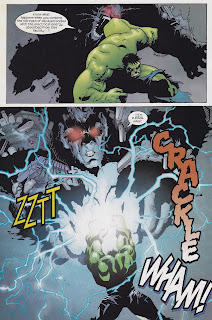 Last up is James Kochalka. He is one the best writer/artists out there today. Check him out here. His version of the Hulk touches on everything that is scary, magnificent, stupid and sad about the big green one... 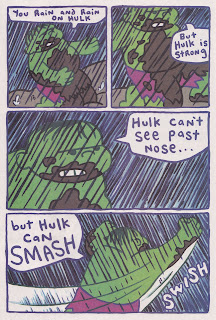 Posted by David Robertson at 2:45 PM No comments:

The latest edition of the International Journal of Comic Art (Vol. 11, no.1) carries an interview I conducted with Ian Kennedy, who is well known for his aerial dogfight / aircraft scenes, and science fiction artwork. 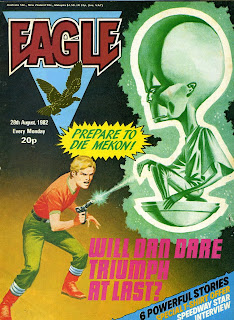 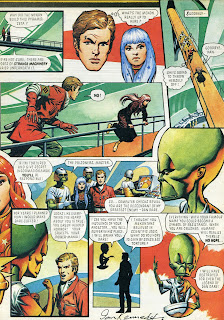 Kennedy: I had a car accident and it was just after I recovered from that, when Barry Tomlinson came at me and said, “We’re looking for someone to take over Dan.” They’d resurrected him, but I don’t think they were too happy at the way things were going. And he said, “Can you take it on?” That was ‘82, I think.

Robertson: Gerry Embleton had brought it back.

Kennedy: I think Gerry was involved.

Robertson: So he obviously wasn’t going to be doing it any more.

Kennedy: I don’t know who it was they were unhappy with, but they just felt it was lacking something, and they had hopes I might be able to, with my Air Ace experience, etc, the mechanical stuff, they thought, and hopefully they were right, that I could inject the sort of thing they wanted. They must have been successful, because I think we did it for about ten years before Eagle folded again.

Robertson: You did actually draw the original Dan Dare character in some stories, didn’t you? Most of the time it was the grandson.

Kennedy: That’s right. We had to, now and again, have a flashback. That’s right, yes, yes…

Robertson: You actually had Dan Dare being a pilot in the war, I remember that.

Kennedy: Yeah? You’ve got a better memory than me. (Laughs) 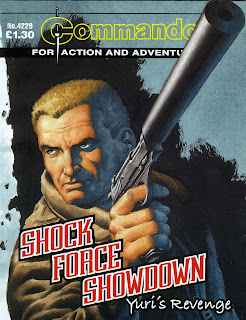 Kennedy is an interesting fellow, and after sixty years in comics, is still working away on Commando for D.C. Thomson. Above is his painted cover for the latest issue.
Posted by David Robertson at 7:19 AM No comments:

Here is An X-Men one-pager by the Perry Bible Fellowship: 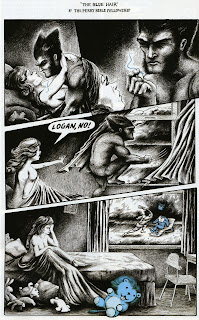 I haven't read X-Men in over 20 years, but that's gotta be the best mutant story they've published in a long time!

Get down to a comics shop and buy this one quickly. A co-worker of mine has read Bizarro and asked me to get him a copy of this new title. But my comics retailer had no copies left. I’d got mine because I asked for it in advance, but other than that, he had under-ordered it. He said quite a few people had asked for it and were disappointed...
Posted by David Robertson at 4:09 AM No comments:

A nice surprise in Borders bookshop yesterday - the latest issue of Crikey! sitting on the shelf at the comics section. I've bought Crikey! a couple of times before through mail order; the first issue to try it out, and the fifth as it had an Eagle /Dan Dare cover article.

They have obviously expanded their distribution network to include Borders now, which must be a financial gamble. It's good to see a comics magazine in a mainstream outlet though, even if it does deal solely with nostalgia. 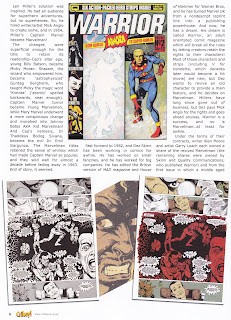 There is Comics International, but even as the new editor vastly improved the content, the magazine's publication schedule fell apart. I think there's been 1 issue of the (previously monthly) magazine this year.

So I wish Crikey! all the best and hope it enjoys a lengthy run. 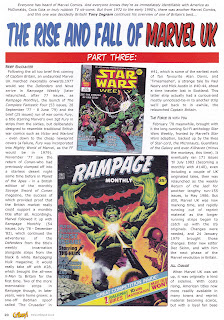 Images: cover and pages from Crikey! #11
Posted by David Robertson at 1:36 PM No comments:

Another artist who did a lengthy stint on the Hulk was Herb Trimpe.

For many who were reading the comic in the early '70s, he is the definitive Hulk artist. I was never taken to that extent with Trimpe (as I mentioned before it's Sal Buscema for me). But he did give the Hulk a real character and drew a lot of memorable stories - a Tyrannus one featuring Mogol the robot, and a couple of encounters with the Glob come to mind.

My favourite of his work though was a tale which had the Hulk having one of his "Why doesn't everyone just leave me alone" sulks, only to have his own shadow attack him: 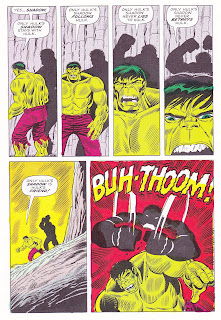 Poor Hulk. That scene is so tragic and melodramatic that it's funny. It must surely go down as a classic Hulk moment.

Another name associated with the Hulk for a long time was Peter David. He wrote the comic for over ten years. I'd read some David before, and had noticed if he wrote a story, there was usually a bit more to it than in other super-hero comics. I recall a Spider-Man story about a serial killer (the Sin-Eater, I think), and another nice one examining J. Jonah Jameson's reasoning behind his hatred of Spider-Man - a story whose mood was much aided by being inked by Kyle Baker.

Quick history lesson: When Marvel Comics printed Hulk #1, the character was grey. But he was coloured green from the first page in #2, and stayed that way for the next 25 years, no-one ever mentioning it in the story, and subsequent reprints of Hulk #1 recolouring him to green. Knowing he had been grey at first was a fact only die-hard fans knew, and there was no suggestion that the skin colour change had actually "happened". However in 1985, the idea that the Hulk was originally grey was written into continuity. The Hulk was separated from his Banner persona and emerged as the grey Hulk again.

One real standout Hulk issue by David was drawn by John Ridgway in 1987. It featured this grey Hulk: 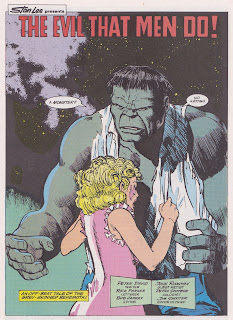 I think Adam Kubert drew a good Hulk. This effective little sequence is from a story that jumped ahead ten years to have the Hulk's sidekick Rick Jones tell the story of the decade. In it, Banner undergoes his metamorphosis without displaying any stress: 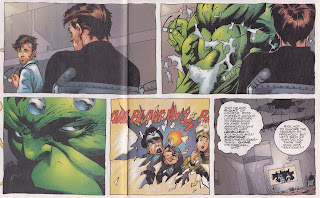 Nice storytelling there too, with the Hulk's exit suggested, but not shown.

David finished his run in 1998, but would return to the Hulk a few years later, and has also written one-off specials.
Posted by David Robertson at 11:15 AM No comments: 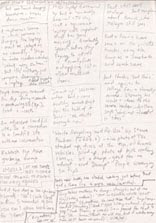 When I'm writing, which is all the time, I'm always on the lookout for ideas. These can be used either for new stories or to implement into my existing ones in progress.

I'm currently writing a story about a guy who works at a dump. So everytime I do actually go to the local dump I get another idea and scribble it down on whatever bit of paper is to hand. Later on I write them all up into my sketchpad - the same one I do all my page layouts on.

I have a rough framework for my story, so it's a case of hitting the beats I have to, and sprinkling these new ideas throughout.

The image above is all the ideas I've collected over the years for Dump, including the ending.
Posted by David Robertson at 12:05 PM No comments:

GET THEE TO A LIBRARY part 2 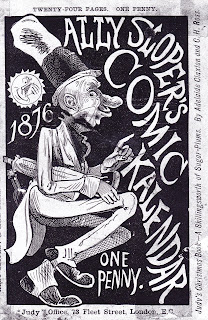 Ally is generally regarded as the first comic character in the UK (please send all dissenting theories to someone else), and also fights it out with the Yellow Kid for the title of first ever. 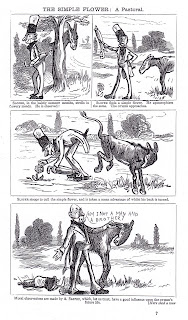 Posted by David Robertson at 12:03 PM No comments: