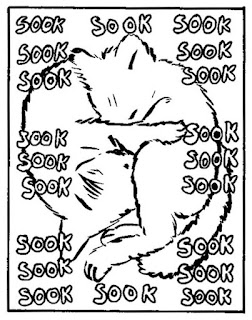 I've started a fun new project. I've always been interested in finding single panels that are effective when isolated from the complete narrative. Maybe they convey a story on their own, make you intrigued about the bigger story, have great composition, or are funny. Maybe all of those, maybe none. Whatever it may be, I look for something that makes them worth considering alone. I'm going to choose and scan a selection of these and thought I'd start with Star Wars comics.

Have a look here.
Posted by David Robertson at 5:05 PM No comments: 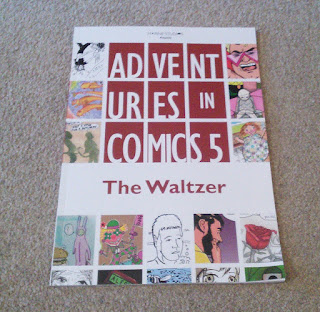 I have a two page story in the new issue of Adventures in Comics, which is out now. It's a very nice 64 page glossy booklet with comics based on the theme of "The Waltzer".

For information on how to get yourself a copy, please e-mail admin@marinestudios.co.uk
Posted by David Robertson at 3:01 AM No comments:

Email ThisBlogThis!Share to TwitterShare to FacebookShare to Pinterest
Labels: Adventures in Comics, Why Waltzer Man? 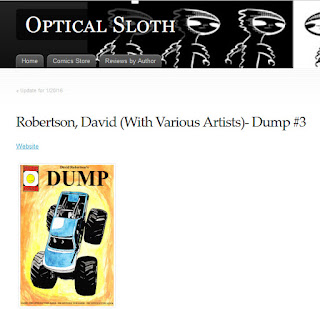 Kevin Bramer has reviewed my comic over at Optical Sloth.

Have a look here.
"RIP to Dump, as David says in the afterward that this is the last issue. But he is starting off another comics series and is going to put out the collected Berserkotron, so if you’re a fan you have nothing to fear. If you’re not a fan, why hello there, allow me to try to convince you that you’re missing out! This is a collection of stories, all written by David, with roughly 2/3 of them illustrated by David too and the other 1/3 illustrated by other artists. The final chapter of Dump and the experimental story “November” take up about half of this hefty comic, but I’ll get to those in a minute. Subjects of other stories include whether or not you give a fuck, the consequences of spying on people at 3am, an excellent closed loop of a nostalgic time travel story, running into the former most popular kid in high school many years after the fact, an orb, whether or not it is good to feel pain, that thing you sense in your room while you’re sleeping, being attracted to a random stranger on tv, the Bum Monster, dreaming of teeth, making a wish, playing the music festivals, the decline of sales of televisions and wishing to be enveloped by another human. That’s all suitably vague and enticing, right? Nothing to alarm anyone with possible spoilers. I thought the Dump story had a damned fine ending to the overall story, but my memory of continuing stories in comics that only come out every few years can be hazy, so who knows? It worked just fine on its own regardless. Finally there’s November, which is a collection of strips from November (duh) that I really wanted to like more than I did. Oh, I liked the content of them just fine; the one about his old cat, the Garfield parodies, being trapped in a car with a farter, how Do The Right Thing is just as relevant now as when it was released, etc. The problem is that all the strips were done in pencil (undoubtedly to make it easier to meet the requirements of a strip a day), which is just plain old uglier in collected form, especially compared against the other stories in the comic. Still, some slight aesthetic problem I have with it is no reason to scare anyone else away, as if you can get past that the actual strips in that section were thoroughly engaging. It’s a fine end to a fine series, and David really might want to consider giving this series the collected treatment too in a few years. In the meantime, enjoy the finale! $5"
Posted by David Robertson at 4:22 PM No comments: