Andy Oliver has written a review of my comic Dump over at Broken Frontier.

David Robertson’s Dump anthology is one of those refreshingly old school small press publications that embody the DIY culture of self-publishing with an unashamedly eclectic collection of shorts. Published under Robertson’s Fred Egg Comics imprint this second issue diverges from its predecessor in that, apart from Robertson’s own work, it also contains a number of one-page autobio vignette strips that give its guiding light the opportunity to work with a number of other artists; all of whom have their own very distinctive approaches to the comics page.

The main story – the titular ‘Dump’ – is a continuation from the previous issue and, perhaps strangely in the circumstances, is probably the least interesting offering here. Its protagonist Bert – a more obviously caricatured character within a world of largely realistically depicted players – is slowly learning the ropes of his new employment in a waste management plant. Amid the humdrum tedium of the pedestrian working day, unexpected intrigue enters the lives of the dump workers when one of them discovers a laptop that just may hold information vital to national security. The main problem I had with ‘Dump’ was that it seems unsure exactly what its premise is. Sometimes it’s apparently a Clerks-style slacker slice-of-lifer and at other points a conspiracy thriller but it never really succeeds in merging the two into a coherent whole.
Of more note are the aforementioned one-pagers where five different artists team up with Robertson. Two strips in particular stand out. The first of these is ‘Dream of Being You’, a collaboration with Stephen Boyd.  In the endnotes to the issue Robertson reveals that Boyd’s art  to this piece already existed and he subsequently added text around it to create a narrative. A simple strip depicting a rain swept street, and a contented dreamer cosily asleep in bed within one of its houses, becomes something far more nuanced here with the writer’s reflective thoughts on the plight of the homeless added to it. Similarly ‘Yay! Party!’ (below) with art by Keara Stewart, focusing on anxiety in social situations, works so well because it’s an instantly recognisable scenario and Stewart’s loose style evocatively captures that sensation of panic we feel when we believe we have lost control of events. The Donna Law illustrated ‘Coleslaw’ – an odd ode to mayonnaise-smothered vegetables – is also fun in its juxtaposition of the timelessness of the inconsequential and the finite nature of human existence.

The second half of the issue is made up of the four-pager ‘History of E-Mail and the Internet’ (below) and his 24-hour comic ‘Everything’. The former is a thought-provoking encapsulation of the quantum leap in information dissemination over the last two decade; a neat précis of developments in that arena but one that’s quite text heavy and perhaps could have done with being given a little more room to breathe.

If there was one strip that really connected with me in Dump #2, though, it’s ‘Everything’. I always find it a little churlish when art on 24-hour comics is criticised because the very nature of the exercise means the work will be raw and unsophisticated. From that statement you can obviously take away a sense that the visuals here are not that polished but for a spontaneous piece of storytelling there are still some inventive touches in these pages. Robertson approached the concept of the 24-hour comic with a pure vision, determined to come to the project without a prepared topical objective.
What we get in these pages is something that is simultaneously extravagantly ambitious and yet utterly down-to-earth. It’s Robertson’s ruminations on the meaning of life boiled down to the pursuit of his own passions – his journey into the world of comics from enthusiast to critic to small press practitioner. Jaunty and engaging in tone if (unsurprisingly) a little rambling in places, it leaves the reader feeling fully invested in Robertson’s love of the form – an almost infectious enthusiasm – despite art that is largely uncomplicated in delivery. There’s also something amusingly self-referential about a small press comic strip about creating small press comic strips…

Sample pages from the lead strip ‘Dump’
While Dump is, admittedly, often unrefined in technical presentation it does represent a section of grassroots comics that I am always happy to showcase in ‘Small Pressganged’. As long as the work on offer has something worth saying then that sense of democracy that surrounds self-publishing will be deservedly celebrated here. After all, as Robertson displays with gusto here, the opportunities for getting out there and simply creating your own comics for the sake of it have never been greater."
Posted by David Robertson at 10:22 AM No comments:


I have a 4 page story called "Room Tour" in Treehouse Comic 3.

The third issue was launched at Tin Roof art studios in Dundee yesterday. STV ran an interview with Stuart McAdam on it here.


"Head to the third Treehouse launch for a very special event

By Joe Birchenall on Friday 8 August 2014

They say good things come in threes and that's exactly what the guys at Treehouse Comics will be hoping for this weekend.

That's because they'll be launching the third instalment of the popular Dundee comic book at a special event at the Tin Roof Art Collective this Saturday from 7pm.
Seven of the finest artists across Scotland have contributed to the comic, which is now available in Waterstones, including popular Dundonian talent David Robertson for the first time.
But, in addition to the exciting next edition of the comic and some free badges, the artsy folk have also built the ultimate treehouse for guests to enjoy.
Designed to resemble the dream treehouse that we all wanted as teenagers, the comic book team have spent most of the past week working to set it all up.
We've been speaking to Stuart McAdam, who edits the comic, for all the inside details and we've even got some teaser images for you to enjoy as well.
In the meantime though, here's the comic's brand new front cover designed by Norrie Miller.

Fans can expect the comic to have the usual eclectic mixture of subject matter, and its tendency to mask more serious ideas or concepts with nonsensical and humourous story-lines.
"The comic is basically a continuation of what we've been doing before with the previous comics," explains Stuart, who along with Neil Scott edits the comic anthology.
"There’s only seven contributors this time round, which is different as we've usually had 12. I've been a wee bit all over the place with various projects so I'm not in this one.
"But we do have a new contributor in David Robertson, who's quite well known in Dundee for his comic - it's called Fred Egg."
What else is different is the fact that the team have spent the last five days constructing a treehouse for guests to enjoy.
Previous events have been much lower-key but Stuart says it's something they've wanted to do for a while.
"To be honest we've wanted to build a treehouse since we first launched the project last year to be honest," he continued.
"Guests will get to enter it and we've built all the walls and the roof. Even the interior will be kitted out like it’s a dream treehouse or club house you wanted when you were 15.
"There will also be a barbeque and a bit of a party for the launch too. We've been doing a few conventions lately so we've got a collection of wee things to sell; for example David Kerr has quite a few mini-books.
"We’ll be going to a convention in Finland this September and to Thought Bubble down in Leeds - which is the biggest comic convention in the UK.
"But on the night, we’ll be giving away badges and we’ll be selling the remaining issues of edition from the first and second comics."

A treehouse installation was built and looked terrific... 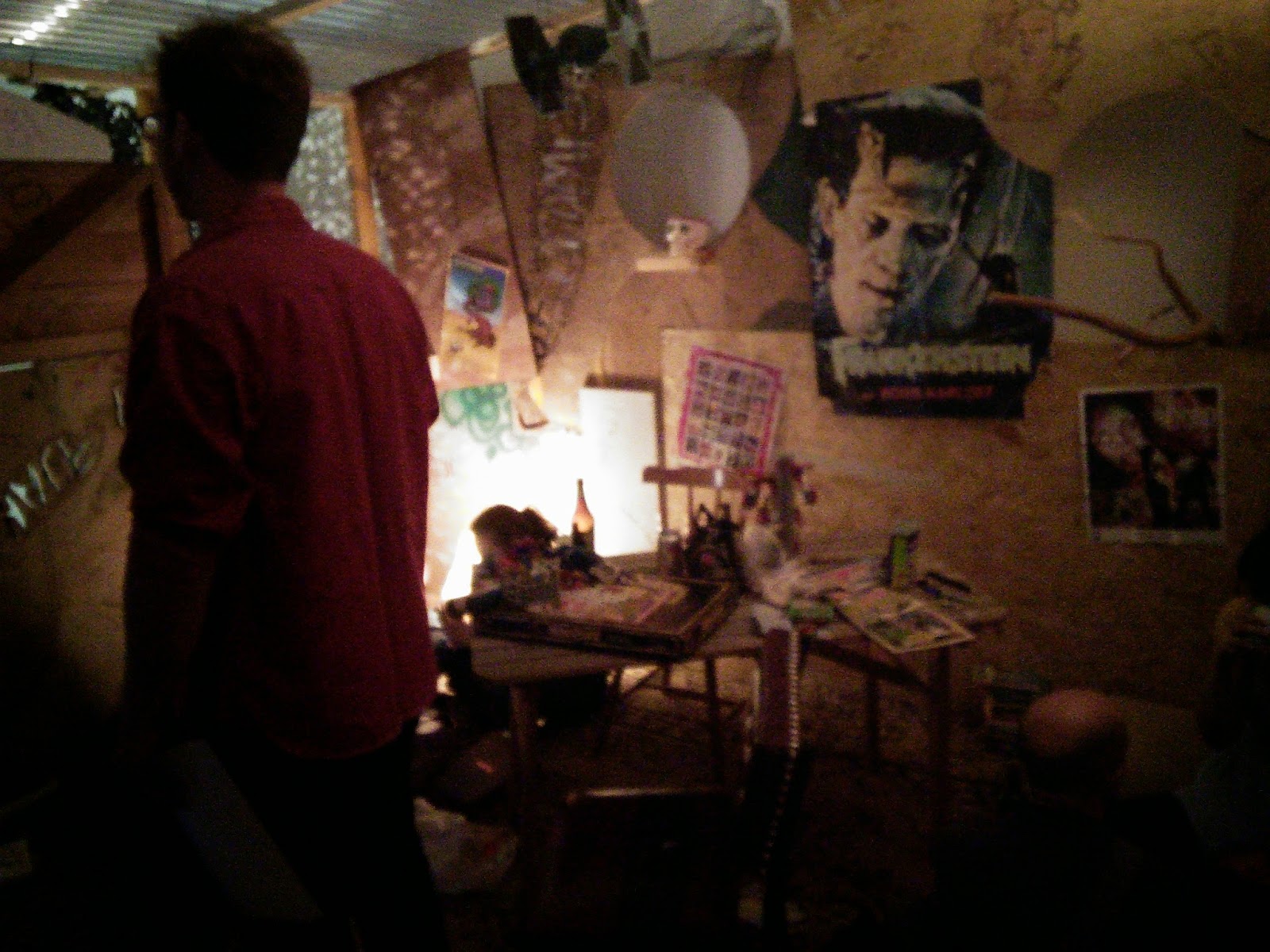 Comics were on sale:
There was an exhibition of original art...
There were artists in who came along and got set to sketching as proceedings went on... 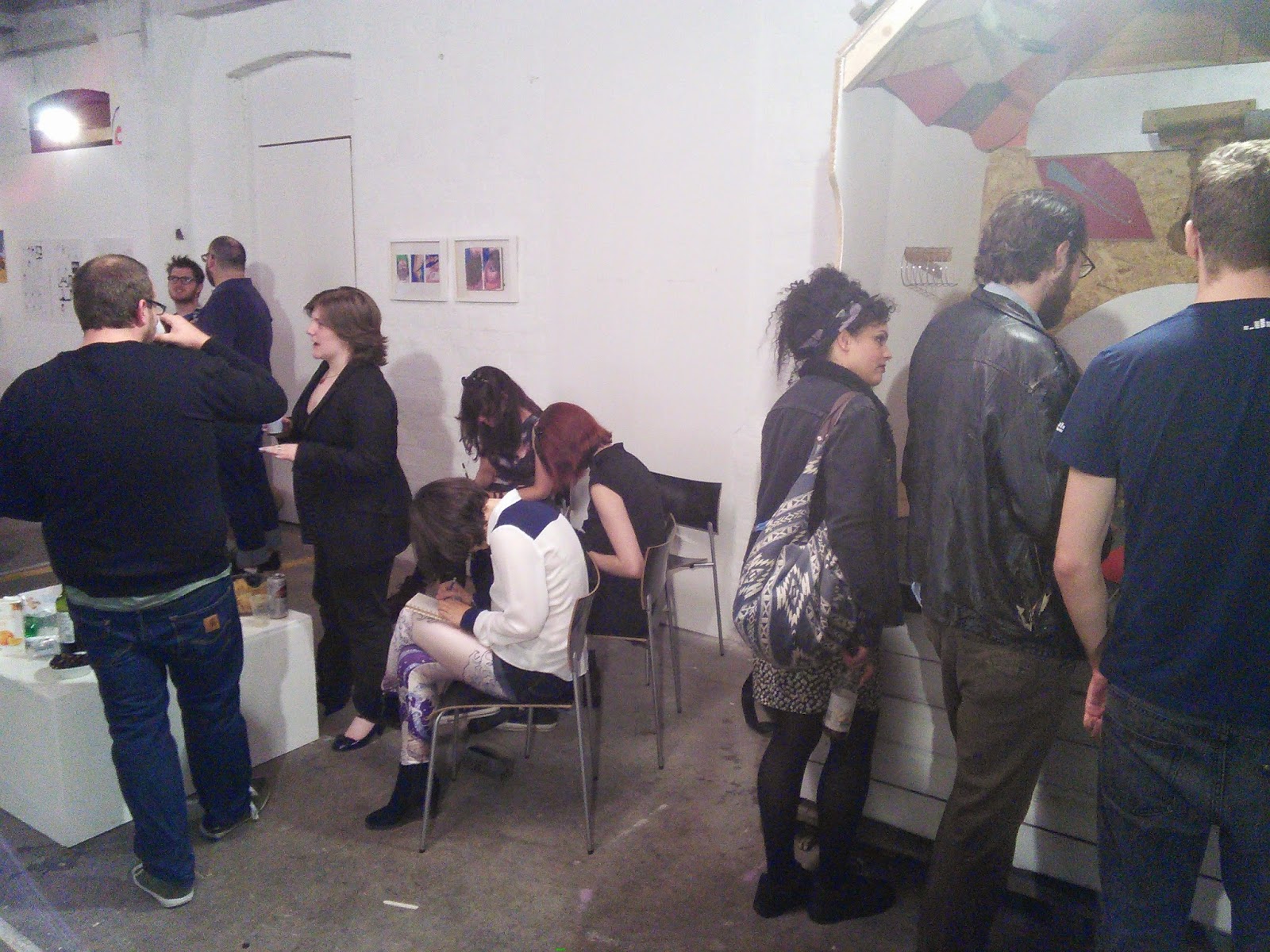 This was the first exhibition I've been in where I was onsite. It was a new experience to have folks studying your work. What's the etiquette? Are you to introduce yourself as the artiste? I decided to leave people to it...

A great night. I feel lucky to be involved in Treehouse Comics. They have a lot of talent and enthusiasm and are an inspirational bunch.

The exhibition is on for the rest of the week, so head along to Tin Roof for a look if you can make it!

Posted by David Robertson at 2:40 PM No comments: