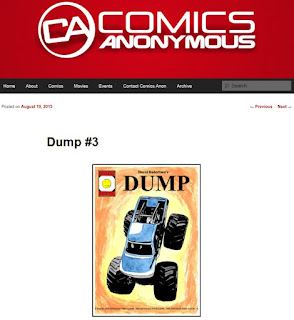 My comic has been reviewed over at Comics Anonymous.

"David Robertson brings us the third and final edition of his Dump comic released through Fred Egg Comics.
It pulls together a sea of ideas and while you could class this as an anthology there’s so much more to this than first expected.  A solid mix of stories and ideas that covers everything from time travel to bum monsters and everything in between.  This issue is starts and ends with some longer stories and some interesting shorts but the “30 day comic event” David took part in makes up a good run of the pages and shows off the diverse range his writing & artwork has to offer.
The nods to the likes of Star Wars, the homage to Garfield and switch from solid black lines to a far more sketchy style works well given the short, punchy nature of his chosen themes.  While those themes flip from one thing to another they also help convey a mix of emotions too as the funny, the sad and the crazy elements all mix well to give this a rollercoaster feel to it with each page turn bringing a surprise subject and response.
There are also some guest artist that contribute to this issue with work from Neil Paterson, Pam Wye, Keara Stewart, Damon Herd, Donna Law & Ludi Price all blending well with David’s own style to give this a consistent feel to it.  While a couple of these stories have already appeared in the Treehouse anthologies it’s good to see more of David’s work together in one place and while this may be the last issue of Dump…..I’m sure we’ll see more from him soon.
You can check out the Fred Egg Comics Blog and pickup the issue over on the Big Cartel page.
7/10
G-Man"
Posted by David Robertson at 1:27 PM No comments:

DUMP #3 at DOWN THE TUBES 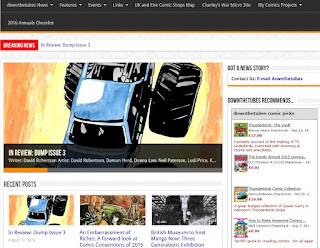 John Freeman has written on Dump #3 over at Down the Tubes.

"Continuing in what seems like some mission to offer the most eclectic and diverse of comic strips, David Robertson’s Dump returns for a third and, apparently, final issue offering stories of night-time nerves, time travel weirdness, autobiographical stories and reflections on life and death.
We also, at last get the concluding part of the title’s main strip “Dump” starring Bert Ainsley, which picks up straight from Issue Two as two hapless workers (one of them Bert) at a council dump find life spiralling in ever decreasing circles.
It’s certainly a quirky mix from the get go with “Things to Do At Three O’Clock in the Morning” that jolts you with a subtle scare but you’ll end up smiling at; strips like the thought-provoking “Television: The Drug of the Nation (Not)”, drawn by Donna Law; and a series of well reproduced pencil-only strips, the result of David’s month of drawing a story per day for a month. This “30 Days of Comics” offerings are wide ranging and include some delicious barbs at the expense of a well-known US comic strip starring a certain cat. (If you can’t guess which strip I’m talking about, you’ll just have to go an buy an issue, won’t you).
With its mix of David’s strips drawn his own inimitable and distinctive style, and impressive work from artists such as Pam Wye and Damon Herd, among others, plus an interesting set of notes on process to round off the issue, Dump Issue 3 may be considered by some as experimental, but it’s certainly as distinctive and memorable as the first two issues. Check out David’s blog for samples from the collection – it’s worth a mouse click."
Posted by David Robertson at 2:20 PM No comments: 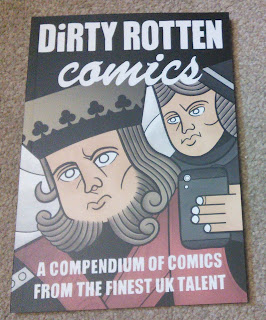 Further to yesterday's post regarding a review at comics website Broken Frontier, I am pleased to say that the postie today brought me my contributor copy of Dirty Rotten Comics #5.

It's a fine book. Loads of variety and great comics.

The story I have in there is "Tiddlywinks", which was itself the subject of a short series of work in progress blog posts here.

The book is now available at the Dirty Rotten Comics website!
Posted by David Robertson at 2:27 PM No comments: 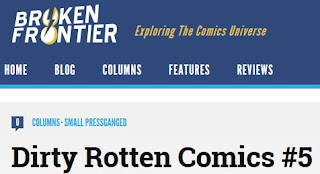 Andy Oliver has written on the new anthology Dirty Rotten Comics 5, which I have done a story for. The comic also features;

Have a look at the review here.
Posted by David Robertson at 3:15 PM No comments:

Gary Smith has written on an anthology I'm in - Treehouse #6 - over at The Big Glasgow Comic Page.

Posted by David Robertson at 1:59 AM No comments: