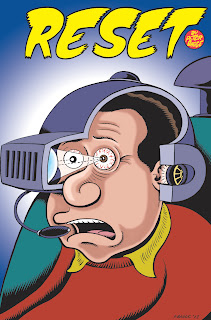 I’m obviously not scanning the internet as often as I should. It took opening up the latest Previews catalogue to see that Peter Bagge has a new series out soon. A new comic from Bagge is always a cause for celebration. I previously did a lengthy interview with him in 2008, you can have a look here if you so wish. Since his big series Hate and Neat Stuff, he seems to be following a pattern of releasing a new graphic novel every 2 or 3 years, which is just fine by me.

His new comic is called Reset and is published by Dark Horse. This summary is from their website:

If you could relive major events in your life, would you take a stab at making things better—and would your best attempts only make things worse? Or would you use your second chance to put your most twisted, perverted fantasies in motion? These are questions washed-up actor and comedian Guy Krause asks himself after he signs up to be the main research subject for a virtual-reality experiment.

Excited about this series, I asked Peter to tell me some more about it…

DR: You're quoted as saying "I originally envisioned Reset mostly taking place in the virtual fantasy world of protagonist Guy Krause’s imagination". Are there similarities between this story and Other Lives?
PB: Yes, in that they both touch on the use of computer technology as an escapist tool, while also revealing much about someone's character by the way he or she uses it.
DR: Krause is a willing guinea pig in this story. Does he give informed consent? In the cover image he seems perturbed.
PB: Yes, he signs a contract, though as you'll find out when you read it NO ONE is "fully informed" re: this technology. I'd be giving away too much if I explain why, though!
DR: That image reminds me of Kubrick's A Clockwork Orange. Were you influenced by that movie in creating this comic? Or is that way off?
PB: Not influenced, but not way off either. Again, I'm trying not to give too much away!
DR: Ha ha! OK, what can you say? Why should I buy this comic, Peter?
PB: To answer all these questions you've been asking, David! This book contains the KEY TO LIFE!
DR: Ha ha! Brilliant! I don’t doubt it! What else can we look forward to from you in the future? Do you have any other comics lined up after this one?
PB: Yes, a biography of Margaret Sanger. Go figure!
DR: Have you actually finished Reset?
PB: I'm almost done with issue 4, the final issue. 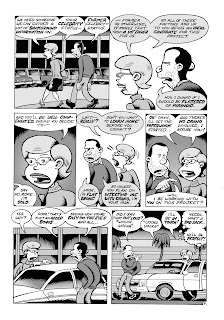 I’m looking forward to reading this. The first issue will be in the shops April 18, 2012.
Posted by David Robertson at 3:53 PM No comments:

Details can be found here.
Posted by David Robertson at 2:07 PM No comments: