I was asked about Valiant books yesterday, and in particular Kelly's Eye. I knew I had a couple of issues at home and here is the story in question: 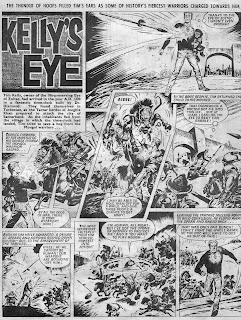 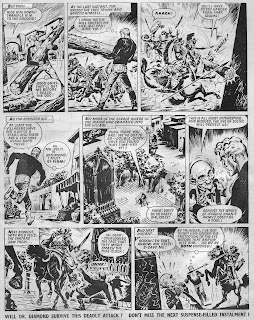 This episode of Kelly's Eye is from the 20th September 1969 edition. Valiant ran covers with outlandish images such as the one below with dinosaurs and cavemen running around... 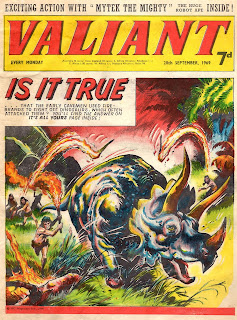 "Is it true... that the early cavemen used firebrands to fight off dinosaurs, which often attacked them? You'll find the answer on It's All Yours page inside!"

Of course, you'd excitedly reach for that page and be presented with a sobering No. No, cavemen did not do that. Cavemen and dinosurs did not live at the same time.

Researching Valiant comics online now is complicated by the fact that thirty years later there was an American line using the same name. This situation is similar to looking up the UK children's Phoenix comic, and being inundated with pictures of Jean Grey from the X-Men.
Posted by David Robertson at 12:50 PM No comments:

I took part in Creative Dundee’s monthly event Make/Share last Wednesday. It's an open call to anyone making things to come and talk about what they’re doing.
It’s held at the MakerSpace in the Vision building at Dundee’s waterfront. I knew I was one of three speakers, and as it runs 7-8.30pm, I had about half an hour.
There was a limit on how many images you could take along – 4 or 5 in total, which was perhaps a more problematic number to someone doing comics rather than other creative endeavours, what with the emphasis being on sequential storytelling. But no matter, I decided to show a page each from the 4 most recent comics I’ve put out: “No Greater Love” at the Guardian #opencomics page, “Tiddlywinks” in Dirty Rotten Comics #5, “Silently Falling” in Jack Sprat #1; and “A Book with Death in the Title” from the forthcoming Treehouse #7.
What was interesting was not knowing the extent to which the audience was familiar with comics. In one respect, I can talk about comics minutiae forever, but how to structure a half hour talk to people who maybe have no prior interest? A brief intro about how I came to start doing comics and then the background to each of the 4 stories was the way I went.
It’s always great to hear people’s interpretations of my stories. An intriguing one for "No Greater Love" came on this night, in which the mother had died after giving birth and the father was now left alone. Because the story is told in images, there is a lot of room for interpretation, and I found this take fascinating.
The MakerSpace studio is filled with creative people with an interest in technology. Another of last night’s speakers was Grant Richmond, who had taken an old radio, gutted it like a fish and refilled it with modern electronics, replacing the speakers and enabling it with wi-fi. Impressive, and he still hasn’t finished tinkering with it. The other speaker Andrew Kieran, has an enormous weaving machine onsite that he has transported around Britain. It too had a technological aspect – one of his woven articles has a mobile code as part of the pattern.
I enjoyed shoehorning self-published comics into the creative arts arena last night. A really fun evening.
Posted by David Robertson at 2:04 PM No comments:

Belle Whittington has reviewed Jack Sprat #1 over at Books & Broomsticks, and included a preview of my story, "Silently Falling".

Have a look here.
Posted by David Robertson at 2:34 PM No comments:

Jack Sprat #1 has been reviewed over at Les Sentier des Morts, with the following missive:

It's a first for me, being reviewed in French!

Have a look at the full article here.
Posted by David Robertson at 12:28 PM No comments: 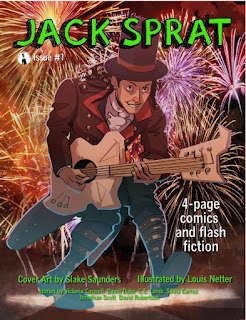 This is the cover to the new magazine Jack Sprat, edited by Emily White, and featuring a mixture of comics, flash fiction and artwork by Silvia Carrus, Victoria Caswell, David Duke, C.E. Lamb, Louis Netter, Slake Saunders, and Jonathan Scott. 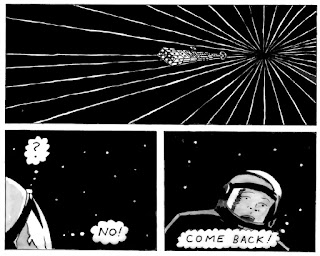 The entire issue can be downloaded free at the Jack Sprat Press website. Go have a look here.
Posted by David Robertson at 10:54 AM 2 comments: