Here is a lovely painting by Bob Wakelin published in the Marvel UK Spider-Man Christmas Special 1984. 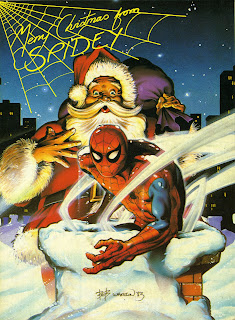 Have a Merry Christmas!
Posted by David Robertson at 2:34 PM No comments:

Yippee! It's nearly Christmas. Here's a festive four page tale by Chip Zdarsky. This is from The Collected Prison Funnies, published in 2003. Click for the larger versions... 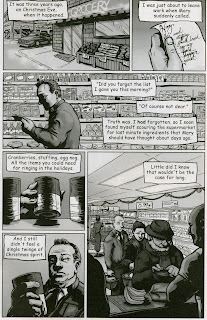 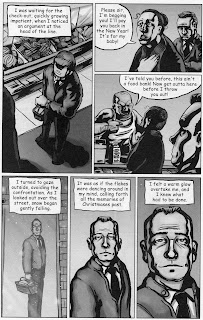 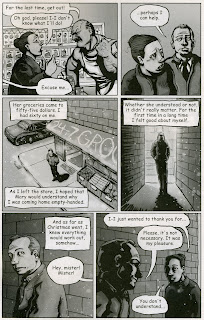 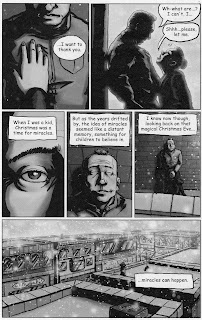 Posted by David Robertson at 1:41 PM No comments:

Heading towards Christmas, so I've scanned a festive cover and story featuring Doomlord, from a December 1983 edition of Eagle.

Doomlord began as a photo strip. In the early 80s, Eagle had a few photo strips alongside its drawn ones. These were in genres such as football, western, etc. Doomlord was sci-fi made with photos of someone in a rubber mask.

It was witty though, and dealt with moral and philosophical issues. It was also popular which meant when the photo strips were done away with, Doomlord continued with artwork from Eric Bradbury and Heinzl among others. The scale of the science fiction action could be expanded outwith having to photograph it.

Alan Grant wrote both the photo and drawn versions, so there's a real continuity to the entire series.

So anyway, here's a Christmas themed pause in the earth-shattering main storyline. 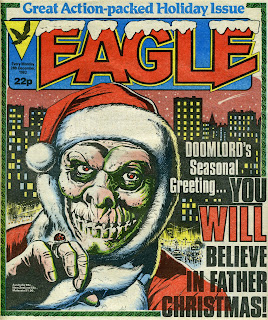 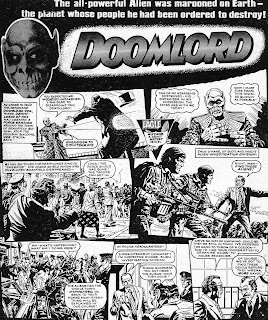 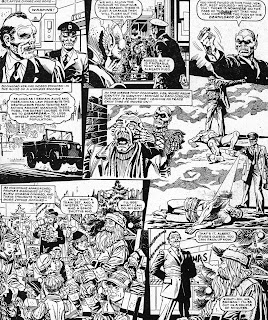 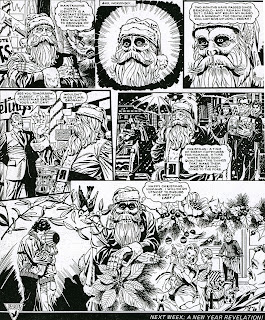 Posted by David Robertson at 3:11 PM No comments:

This lovely set featuring artwork direct from the comics was released in 2006. The set is split into covers and images. 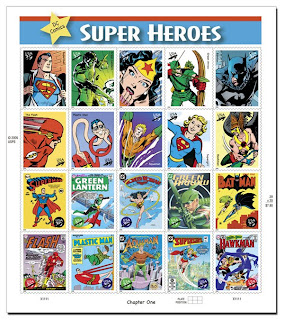 The strange thing is I have precisely one Aquaman comic, purchased in the late 70s, and its cover is the image used for his stamp. There must be thousands of Aquaman comics out there.
Posted by David Robertson at 2:59 PM No comments: 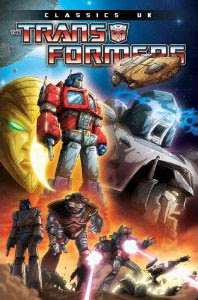 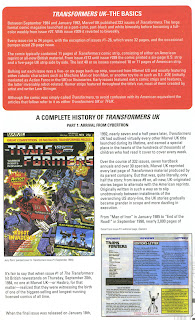 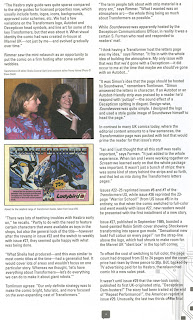 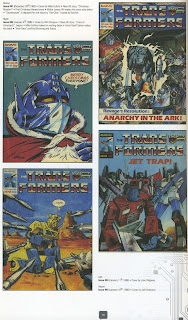 In the interests of full disclosure, I must write that I was involved in a small way during the production of this book. However I would have written favourably on it even if I hadn’t been. This book is a collection of comics which were produced by the Marvel UK office in the mid 1980s. I enjoyed the initial run at the time, as mentioned here.

As well as the stories themselves, with terrific artwork from John Ridgway, Geoff Senior, and many others, there are really fascinating behind the scenes articles. These include photos of the offices, and new interviews with most of the artist and editorial staff involved. Lots of artwork produced for poster, sticker and transfer giveaways is reproduced.

It was interesting to note that so many of the team producing the comic were practically novices, learning their craft on the job. Amazing, when you consider the big success Transformers quickly became, and the all-conquering multimedia franchise it has ended up as.

It’s also amusing to see British pop culture explained for an American audience. Hence the description of British annuals as being hardback books that come out close to Christmas and bear the following year’s date on them.

One gripe I would have is that as someone that read the original comics, I am used to seeing these stories in their original dimensions, as opposed to their new smaller size here. I imagine this shrinkage wouldn’t bother you if you hadn’t seen them before in the first place.

The volume is sizable, just shy of 300 pages. A lot of love has gone into the production, as evidenced in IDW editor James Roberts’ introduction. A terrific volume.
Posted by David Robertson at 1:56 PM 4 comments: