There comes a point when you've just got too many comics, and it's time to get rid of some. A nice place to take them is a local charity shop, along with any novels, videos or what have you.

Over the past few weeks I've been leaving a bag a day at the door of the charity shop before it opens on my way to work. I then have ten minutes to kill before my next bus connection, so I go and have a coffee in the shop facing the charity store. Last week I noticed that a mere five minutes or so after I drop off the bag, two ladies come along, pick up the bag and go to work in the shop.

Now, this entire scenario poses no problem when it's a 25 year old Spider-Man or X-Factor. 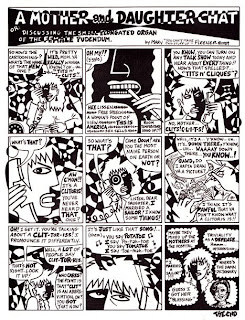 But you'll also know that people don't expect this stuff to be in a comic! As I have sat having my coffee, I have imagined those altruistic charitable ladies in that shop and their faces of amusement and/or horror at the FILTH that is being left on their doorstep each morning. I have found myself leaving my donation, looking around furtively, not wanting to be caught leaving my bag there, hurriedly shuffling across the road for my coffee. "So that's the pervert leaving this stuff" they would proclaim as they saw me leave my bag and run off to the coffee shop!

I'll continue leaving donations for now, but I don't know how much longer I can evade being caught handing stuff in...

Comics page by Mary Fleener. Not one I would hand in to a charity shop, just using the story as an excuse to post some of her great work.
Posted by David Robertson at 3:49 PM