When I was 15 I was deep into Marvel comics. Or at least as much as I could be in a town with no comic shop. In the , that meant you could pick up some of the monthlies, but no annuals, no specials and no mini-series. (Try following Secret Wars II when you can’t get the series itself, only some of the crossover issues) These comics were listed in mail order catalogues as ND (not distributed), a term my friends and I came to detest.

Despite worshiping Marvel in the traditional way, I was not quite at the zombie level. I was always on the lookout for other comics. This was the time of DC’s overtaking of Marvel being a headline – at least in the comics press, and I was certainly open to the idea of a wider world of comics.

Presently, I met a guy who was around ten years older than myself, I guess. I told him I was on the lookout for something different, but I didn’t really even know what that meant. He let me borrow a couple of his Comics Journals. Well…this magazine!

Prior to reading the Journal, the only comics magazine I’d read had been Marvel Age. The one issue I’d managed to get hold of (yup, it was ND too) had been great in my young estimation. Keeping up to date with all the latest Marvel comics – wow! 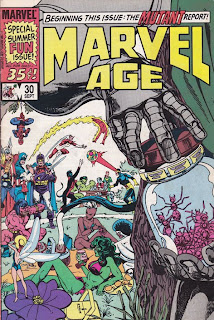 The Journal was of a completely different order though. Names of (in my mind) comics superstars were being written of as real people. Previously, my consideration of these names had went along the lines of “Wouldn’t it be great to draw Spider-Man like Ron Frenz?” Suddenly, I was reading matter of fact detailed copy on problems within the Marvel offices.

The Journal also featured loads of comics I’d never heard of. It was the door to a whole wide world of comics beyond my ken that I’d been looking for. I recall asking a friend what he made of it. His answer: “It’s too serious”. I didn't understand that. I guess I was already pretty serious about comics.

A year or two later I began picking up the Journal whenever I was visiting a comic shop in a larger nearby city. The first copy of the Journal I bought was #127 – which featured an interview with Bill Watterson. 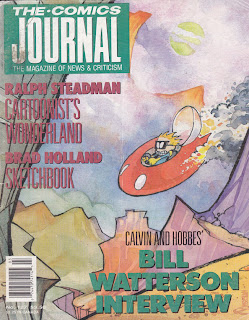 This was my first exposure to Calvin And Hobbes, and as the years have passed, Watterson has withdrawn from public life almost altogether, and so this remains his only in-depth interview. To reiterate: the first Comics Journal I ever bought brought Calvin and Hobbes into my life. It doesn’t get any better than that and my relationship with the magazine was cemented. I began picking up the latest issue as a treat every time I went to a comic shop. Other issues I happened to buy had interviews with Matt Groening and Alan Moore. The Journal became not just my favourite comics magazine, but my favourite magazine, full stop.

So why the personal history lesson on the Comics Journal? Well, 1. it is about to hit its milestone #300. Well done, folks. 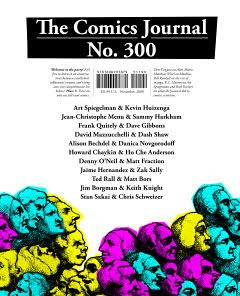 2. After 300, the magazine is stepping off its regular schedule of 10 or so issues a year to bring out just 1 or 2. I’m hoping it doesn’t turn out to be a cancellation in all but name. It is going to become more of a book format. The cessation of the regular magazine will be a loss for me, and for the world of comics in my opinion. Part of the reasoning being given is that more time will be spent beefing up the content at tcj.com, which is fair enough, and I’ll certainly keep abreast of what’s happening there.

I’ll look forward to the newer, bigger print Journal too. I’m just worried that it’ll be quietly taken out back and shot in the head in a year or two. I sincerely hope not.

Posted by David Robertson at 12:19 PM