I’ve been sick all week. In-between shaking, coughing, headaches and the rest, I’ve been lying in bed reading some Justice Leagues from the late 80s.

The trend for revamps really got going in the late eighties. Monthly comics that had been regularly running since the '30s were renumbered, starting again from #1. The companies like doing this as there is always a sales spike with a new number one as readers pick it up to be in at the start of something new. I recall John Byrne taking over Superman with a new number 1 (after Alan Moore and Curt Swan’s enjoyable two-part “Whatever Happened to the Man of Tomorrow?” in Superman #423 and Action Comics#583). Byrne’s book looked pretty mundane to me, but this revamped Justice League series looked good. 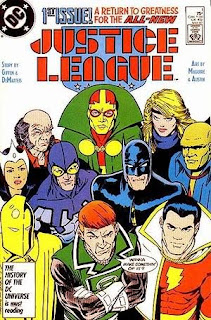 The cover sat on the shelf, the team looked tough and confident and a bit threatening. Anyway it was enough to make me pay up 40p in John Menzies. When I got it home I really enjoyed it. Plotter/layout artist Keith Giffen was a writer I’d enjoyed before on his Ambush Bug comics. I thought scripter J.M.DeMatteis was worth watching too, as he’d written the Kraven’s Last Hunt story for Spider-Man a year or so before. I viewed that as a take-off on Frank Miller, in that it dropped the thought balloons and put loads of disjointed stream of consciousness into boxes instead. Justice League #1 was the first time I’d seen penciller Kevin Maguire’s art too, and I really liked his work. The Justice League comic went on to be a consistently good comic for the next five years.

So. In issue 23, January 1989, the story ends with Green Lantern (Guy Gardner) and Mister Miracle (Scott Free) arguing, and an “atmospheric inversion” taking place – portrayed by printing the artwork in negative: 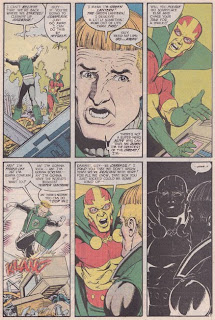 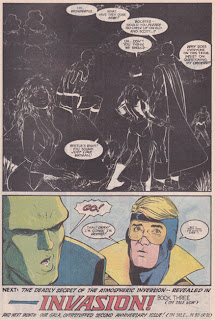 It was an intriguing way to end an issue. I always thought it would be good to see the art as it must have been drawn though. Eleven years later I got a scanner at home and thought about doing this every so often. And now ten years on, an enforced time-out has given me the impetus to do this: 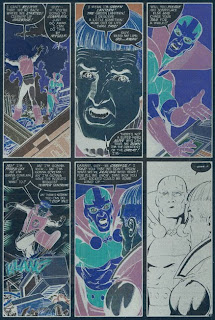 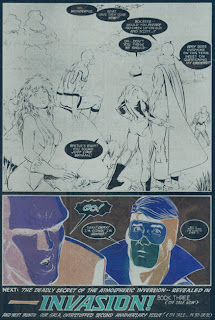 Seeing those images at last has tickled me!

PS. I still don’t know what “the deadly secret of the atmospheric inversion” was. You’ll note it says “Revealed in Invasion Book Three (on sale now)”. I refused to buy any of these tie-in issues on principle – and due to budgetary reasons. The next issue of Justice League started with another story entirely.