Barrie Tomlinson worked as an editor and writer for IPC/Fleetway from the early 1960s to the early 1990s. He has recently written two books of interest to comics fans, "Real Roy of the Rovers Stuff" and "Comic Book Hero". His story Death Wish, originally serialised weekly in Speed comic, has been collected in one fine volume. I enjoyed rereading these stories after all these years, and reached out to have a chat with him... 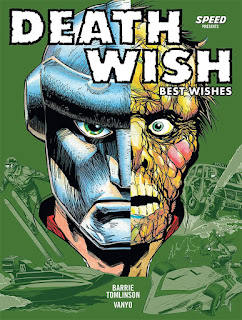 David Robertson: How is it seeing the comics you worked on decades ago finding a new lease of life?

Barrie Tomlinson: It’s really very satisfying that stories I wrote so many years ago are now being shown to a new audience.  I think they have survived the test of time and still look good. Great art from Vanyo! I was lucky to have top artists illustrating my stories.  One of the benefits of being editor/group editor is that I could chose the artists who worked on my stories! 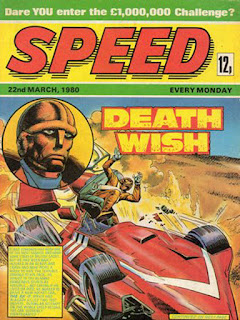 DR: I read Death Wish in Speed when it started, and then again in Eagle and Tiger when it showed up five years later. An eternity in kid years! It was so fascinating the way the story had moved on from the initial premise of looking for an action packed way to die, to a ghost hunter type of scenario. Consistency given by, as you mention, the great art of Vanyo!

BA: I wrote all the scripts but I think I like the Speed and Tiger ones best.  But Vanyo always delivered no matter what I threw at him!

DR: What prompted such a radical change - the inclusion of supernatural elements in the story?

BA: Ghostbusters was very popular at the time, so it seemed a good idea at the time. I’d launched Scream and some of the Scream stories made their way into Eagle. I thought Death Wish could go alongside them. 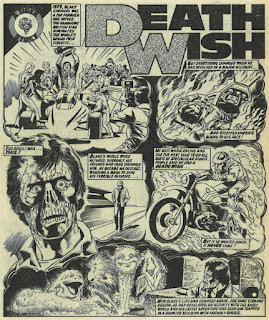 DR: Did you read comics growing up? Which ones do you remember?

BA: I originally read Dandy, Beano and Radio Fun.  Later, I bought Lion, Tiger and Eagle (original version!).  I little realised that one day I’d be producing comics myself!

DR: How did you get started working in comics?

BA: I was trying to get a job in journalism and someone showed me an advertisement saying “Beginners wanted for children’s comics”. I had an interview at Fleetway Publications and got a job. The rest, as they say, is history! 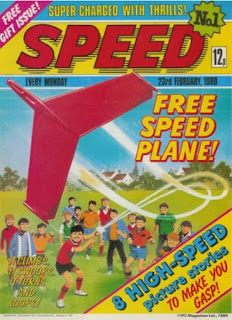 DR: How did Speed come about?

BA: Most of the comics I launched  were my own idea but this one was an idea, I think, from the group editor of the humour group.  I was asked to produce Speed and I think we produced a good publication.  Maybe it looked too much like Tiger!  Everything about the title was fast, including the speed in which it disappeared from the newsagents’ shelves! 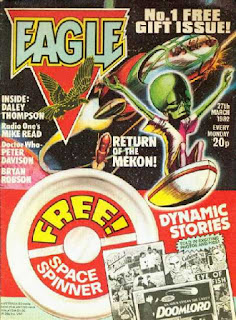 DR: I was lucky enough to get the first issue of Eagle in 1982. Really enjoyed that series. Was there any resistance to the idea of reviving a 30 year old comic?

BA: It was always my ambition to relaunch Eagle but it took many years before I could persuade the management to have a go at a relaunch. The original Eagle was a hard act to follow but I think we didn’t do too badly, considering the new version lasted 12 years. Everything we did was a tribute to the original title.

DR: The photo comics were an interesting development. Did that idea come from the girls' comics?

BA: The original Eagle was always full of new ideas.  The photo stories hadn’t been tried in a boys’ comic so I thought  we would give it a go, particularly as television was playing a big part in children’s lives.  Of course, in those days we didn’t have the advantage of using computers to produce special effects, which would have helped with dramatic, action-packed scenes but I think the photographers and our own art staff did well in producing exciting photos. 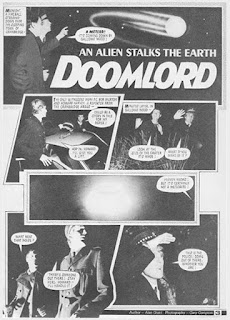 DR: You did a lot of publicity events, and had celebrities write for your comics. What would you consider the most memorable and/or successful?

BA: I was fortunate to have the knack of persuading famous folk to write for my titles.  I suppose the Duke of Edinburgh was the most famous writer. He wrote for the first issue of Roy of the Rovers.   Eric Morecambe also wrote for Roy, with Ernie Wise writing for Tiger. Lots of big name sportsmen wrote for Tiger, including Geoffrey Boycott, Gordon Banks, Trevor Francis, Tony Greig, Ian Botham, Malcolm Macdonald, Mick Channon, Jack Charlton and many others.  Of course, Sir Alf Ramsey took over as manager of Melchester Rovers after Roy was shot. All those celebs were great to work with. I was able to introduce ‘name’ annuals to Fleetway annuals. I produced the Big Daddy Annual, the Suzie Dando Annual and the Geoff Boycott Annual.  Great fun to work on! 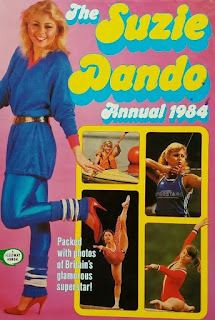 DR: One story I always wondered about was Robo Machines. Specifically, it ran concurrently with Go-Bots, which seemed to be the same group of characters under a different title. What was the story there?

BA: You’ve got me here!  Were those stories in one of my comics? The memory banks are not responding! 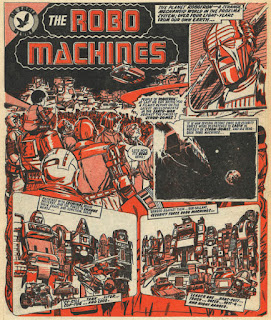 DR: It was in Eagle. It was a story based on toys, much like the Transformers. It seemed that the line was called Go-Bots in other territories. It was a good story, printed with the black, white and red colours.

BA: It’s strange but I still have a blank on that. It’s funny how the odd story vanishes from memory. 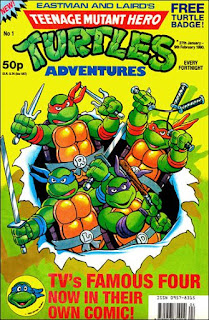 DR: You edited the UK Teenage Mutant Hero Turtles comic. The turtles were a huge phenomenon at the time. How did you get involved with that?

BA: When the publisher got the contract to publish a Turtles comic, there was a bit of competition to see who should edit the title.  I was very pleased when the comic was given to me to edit.   By that time, I had edited a few sponsored titles and had some experience with such things.
I was absolutely delighted to take Turtles up to a circulation of about 800,000. This was at a time when comic sales were falling. At first we reprinted American material and then went on to produce our own stories and artwork.  By that time I was working freelance producing the comics via my own company and selling the complete titles to the publisher.   I think the title won an award for being the launch of the year but the publisher chose not to tell me, the editor, and I wasn’t invited to, or told about, the presentation ceremony.  That’s show business!

DR: Before we finish, this is the perfect opportunity for me to ask you about something I’ve had in my head for decades. I remember getting ready for school one day and a TV ad coming on for the new comic, “Speed”. It featured a live action scene of “Speedboy” running through a crowd of school kids. Did I imagine this, or did it really happen?

BA: I’m struggling with this one as well. I wasn’t responsible for TV advertising and I think I have a vague memory of seeing this when Speed was launched. But otherwise I can’t recall much about it.
I think I was lucky. I had the best job in the world, first as a sub editor, then an editor and finally as a group editor.  Plus I was able to write lots of scripts, including The Hard Man for Roy of the Rovers, Loner and Turbo Jones for Wildcat, Johnny Cougar for Tiger and Death Wish for Speed, Tiger and Eagle.
After I finished working on the comics I was lucky enough to write and produce the Scorer picture-strip for the Daily Mirror. That lasted, six days a week, for 22 years. 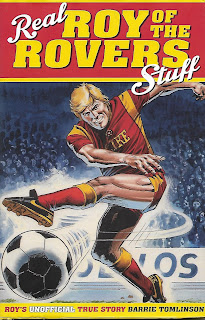 DR: You’ve written about your comics career in a couple of books, haven’t you?

BA: Yes, I’ve had two books published, which are still available on Amazon and at other places.  The first book is: “Real Roy of the Rovers Stuff” … all about how Roy and myself worked together to make him top of the league for football.  The second book is “Comic Book Hero”, about all the other comics I edited. 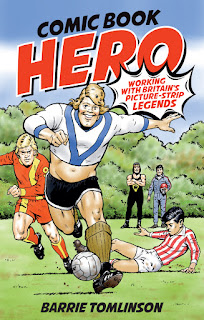 DR: Do you have any other books, or collections of your comics on the horizon?

BA: I’ve just finished my third book which contains more stuff about the comics I worked on, as well as the rest of my life story.  Watch this space for more news about the new book!
Posted by David Robertson at 1:12 AM