Eileen Budd interviewed me recently, and our conversation is now up at Redbird Review.

"EB: Can you give me a bit of background, where did you grow up and do you come from a creative family?
DR: I grew up in a housing scheme called Mid Craigie in Dundee. My Dad drew sometimes – for birthday cards. For some reason we had an electric organ at one point and my Mum played bits of tunes on that.  I remember my sister drawing too, and practicing her recorder!
How did you get into creating comics, how long have you been doing it and what is it about this medium that makes it the best platform for your ideas?
I read comics for as long as I can remember. I liked drawing pictures and I liked writing stories, so it was probably a natural to start doing comics. I actually made up my signature character Fred Egg when I was 7 or 8.

I don’t know if comics are the best platform for my ideas, but the medium is my favourite to work in. It’s the most difficult to work in, the most challenging and the most rewarding. I do like writing just text, but there are many subtle storytelling effects that you can play with, that you can’t do in regular writing. Visually speaking, prose really is just a load of words put one after another. There are pacing effects and use of silence that you can employ in comics. The audience for comics has to be able to read a comic and look at it at the same time, and you can switch gears as you go along. I think that process is what is off-putting to some people who “don’t know how to read comics”. The presentation of ideas as comics is intrinsic to those ideas. Presented in another medium, they would not work.
EB: I noticed in Dump 3 a really strong Scottish influence, but you’ve also produced comic strips that have been included in American anthologies as well, so it’s clear your work speaks to wide audience.  Can you tell me a bit about how you create a character and story that you know an audience will connect to and do you think American audiences differ greatly from the UK?
DR: I never know an audience will connect to my characters. I operate only in hope. I guess I have things happen to characters that I trust will involve readers, in that they will want one outcome or another. 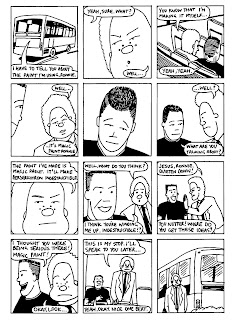 There are superficial differences between US and UK audiences. It’s often stuff you don’t think about that is brought to your attention. I did a 2 issue comic series called Berserkotron based in a high school, and I had a few comments from US readers on how wacky the school was, because they wore uniforms. 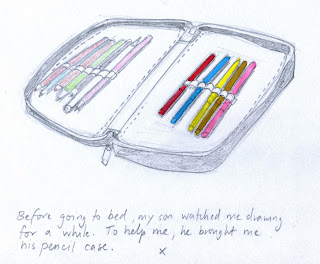 EB: The humour in Dump 3 is very dry, but there are also some quite touching observations, such as the illustration of the pencil case your son brought to help you create.  I wondered if you are a fan of Jeff Brown’s comics and if you could tell me a bit about writing / drawing from your personal experience.
DR: Sure, I like Jeffrey Brown. I remember reading Be a Man and Every Girl is the End of the World for Me. I liked those titles, thought they were funny. And I enjoyed Conversations, that he did with James Kochalka. I am a big fan of Kochalka.
I write everything from personal experience to some extent. It’s all informed by my viewpoint. Even It’s Dehli Belly - a story where I decided to write what I hoped was an appropriate and moving comic about Crohn’s Disease, which I have no experience of whatsoever. Once I’d researched it, it was still filtered through my thought processes. 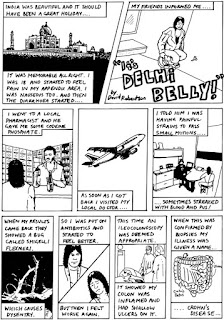 But really I guess the question is more about dealing with personal events and those of people I know. I don’t name any other people or institutions, unless it is an innocuous statement. It is a fine line. You have to maintain your privacy, while still putting something of yourself into the stories. That is a real challenge. 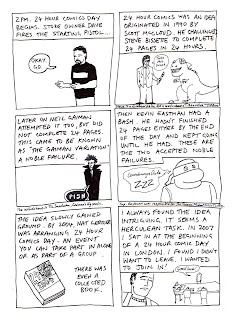 On the opposite end of the spectrum from It’s Delhi Belly, there was a story in Dump 2 called Everything, which was a 24 hour comic wherein I laid out my personal ideas and philosophies on the most important things to me in life. Some of the pages for November in Dump 3 are very personal too. Again I never name members of my family, but I will express my feelings towards them.

EB: Can you tell me why Garfield is in there?
DR: I used to work in a local radio station as a technical operator, a job which involved moments of doing a few things simultaneously with pinpoint accuracy, followed by periods of merely babysitting the equipment until the next round of activity. Each day, the local paper would be sat in the studio and on one occasion I read the Garfield comic. I cannot remember the exact setup and joke, but it was something like Jon talking about his car and in the third panel Garfield sneered that it was a crap vehicle. I absentmindedly drew in another panel wherein Garfield was lying flat on his back with tire tracks leading up to him, running over his body and disappearing into the distance. Amused by this, I went back to my next round of technical operating. The next day, another smartass comment from Garfield, another fourth panel wherein he got his just desserts. I realised that this fourth “comeuppance” panel worked in practically every single Garfield strip. So this idea sat around in the back of my head, and when I was doing the 30 Day Comic challenge I pulled it out for that. And the final one in which he obliterates himself from time itself seemed like a good ending to the project. 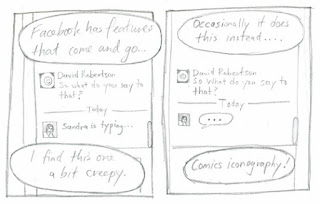 EB: I liked seeing the social media feed drawings, I’ve not seen that before and thought it was an interesting mix of commentary on commentary.  What other aspects of our current popular culture are you interested in putting into your comics?
DR: Thanks! That was really just a case of thinking, “I don’t like that.” And once you’ve decided you want to make comics, you walk around looking for what would make a comic all the time.
I am interested in how technology has affected our daily lives, and have done stories on that. But I don’t really consciously think which popular aspect of culture shall I tackle today. I am interested in lots of different things, and once I’ve done my comics, some of them might fit under that banner.
EB: In a world where large comic producers tend to dominate the comic industry, how important is the indie comic scene?
DR: I guess it’s very important? But like all these things, defining exactly what the indie comics scene is can be difficult. Some people talk about anything that isn’t Marvel and DC as being indie – so that’s the likes of Image and Dark Horse, IDW, whatever. There’s a lot of stuff out there. For my part, I think the small press or minicomic scene is a great place to be with a lot of freedom to do whatever comic you want.
I sometimes see the small press as being talked about as a positive in the sense that it is a good stepping stone to get noticed by the big publishers. And that can happen and is great, but really I believe in it as a thing unto itself. Amazing and beautiful work is being produced by self-publishers, the likes of which could not be dreamed of by Marvel, DC, Image or any of those companies. It just isn’t in their remit to publish that kind of comics art.
EB: I know its hard work to be an independent artist, it requires a large amount of motivation, tenacity and drive, not to mention support from family and peers.  Can you tell me a bit about how you motivate yourself to complete a comic and how you deal with success?
DR: Funny, recently I was feeling motivational as well as motivated, and so I posted on Facebook and Twitter: “Comics people! It is time to make comics now. Go and make some comics.” Which I thought was direct, to the point, come on, let’s go sort of thing! I got a few different responses, the likes of “Okay”, “I wish I could” and “Why bother?”, the last of which I replied with “the answer to your question is comics.” And really if that answer doesn’t make sense to you, maybe you shouldn’t make comics then.
A couple of things that come to mind in staying motivated to do comics. You have to handle the fact that your comics will never live up to your hopes for them. You’ll have great ideas which are perfect because they are in your mind. The only problem with these is they do not exist. So you work and put them to paper and they disappoint you. But they do exist now. Then do another one.
Secondly, comics are time consuming. You are likely to be working on a comic for months and years that will then be read in twenty minutes. Those are the facts and you have to decide it is worth it to stick at that.
As for dealing with success, I’d have to define what success I’ve had. I’d say someone saying “I liked your comic” and talking about it with me is a kind of success. I deal with that by saying thank you! I’m grateful for all the good things that have happened to me because of my love for comics. I’ve met good, interesting people and been involved in some cool projects. I try to stay open to new opportunities, experiences and challenges that present themselves to me.
EB: What does your working desk look like?
DR: It’s a regular round table. I draw hunched over this thing and it’s killing my back. I have to get an angled desk. I have a lamp, a pile of layout books with stories I’ve done in the past, another pile of folders with past originals, a pile of paper and tracing paper, pencils cup. Ruler, eraser and other accoutrements lying around. Tablet is usually knocking around. Under the table is a container with watercolour paints and the like in. My table is often covered in my kids’ action figures. Off to the side of the desk there will more often than not be a pile of comics and books and what have you that has built up and been put to the side in order to crack on with the next thing.
EB: Can you give us a hint as to what your next comic ‘Zero Sum Bubble Gum’ will be like?
DR: More of the same, only better! All the bits you liked in Dump 3 will be accentuated, all the bits you didn’t, there will be no more of that. I’m actually about a third done on Zero Sum Bubble Gum. What can I confirm without giving anything away? I’ve laid out the front cover. There’s a full colour painted strip for the back page. I will be looking at the effect of technology on humanity in at least one story, which I completed today!
EB: Bonus question: Chris Ware’s comic ‘Jimmy Corrigan: The Smartest Kid on Earth’ includes a highly flawed superhero character.  If you had the powers of Superman, which of your vices or flaws would you indulge in the most?
DR: I guess I could eat and drink whatever I wanted in ridiculous amounts, couldn’t I? Does Superman get fat? I don’t think he even needs to eat. Or breathe. He’s weird!"
Posted by David Robertson at 12:52 AM