I went to see Treehouse Comics editor Neil Scott last Saturday. I picked up some copies of #6 and we talked about about setting up an exhibition in the public library later in the year.

Neil is a member of Tin Roof, and our chat led us onto the upcoming exhibition by this group, starting this Friday 19th June and running until the 25th. Neil happened to mention that it was not limited to members - anyone who has had work on display before could do so again. I am indeed not a member, but I've had stuff up as part of Treehouse.

Okay, so when is the deadline? Monday.

Right, let's go. I had a one page story in mind that I'd already written and laid out very loosely. It's called "The Ascent of Man". Here's what I had ready to go: 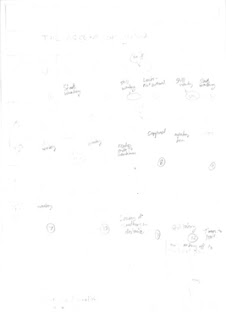 I worked on that over Saturday night and Sunday. Come along on Friday to see how it turned out!

Posted by David Robertson at 2:23 PM